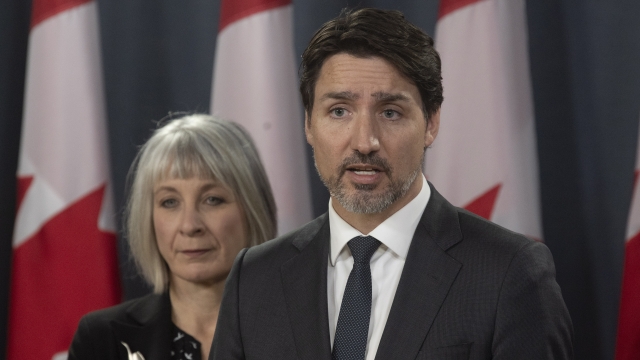 SMS
Canada Is Closing Its Border To Most Nonresidents
By Bailey Vogt
By Bailey Vogt
March 16, 2020
Prime Minister Justin Trudeau said citizens, their immediate families and permanent residents will be allowed to enter the country.
SHOW TRANSCRIPT

Canada is closing its borders to most nonresidents to prevent the spread of the coronavirus.

Prime Minister Justin Trudeau announced Monday that only Canadian citizens, permanent residents and citizens' immediate family members will be allowed to enter the country. U.S. citizens will also be allowed entry for the time being.

Additionally, air travelers to Canada will have to pass a health screening. All flights into Canada will be required to land at one of four airports starting Wednesday as part of "increasingly aggressive" procedures to keep Canadians safe.

Trudeau announced the new restrictions while in self-isolation, which he entered after his wife tested positive for the virus.

The coronavirus was classified as a pandemic last week. As of Monday afternoon, it had infected over 400 Canadians, according to Johns Hopkins University. At least four of those people have died and nine have recovered.