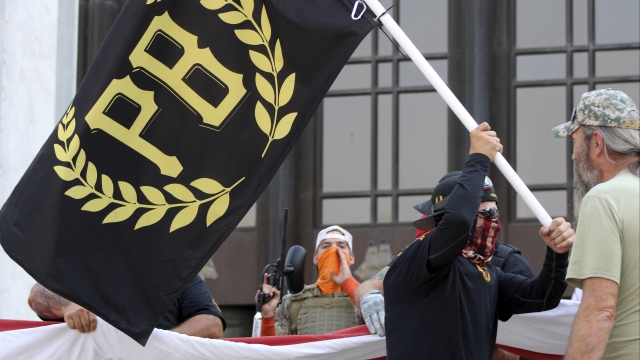 Canada is the first country to designate the Proud Boys a terrorist entity.

The far-right group is known for violence at political rallies.

Canada's top public safety official cited their role in the deadly insurrection at the U.S. Capitol is evidence that its activities have crossed a dangerous threshold.

He says this is about stopping violence, not freedom of speech.

"This is not about politics. It's not about infringing upon freedom of belief, association or freedom of speech. It is about controlling the violent activities of ideologically motivated extremism," said Canada's Public Safety Minister Bill Blair.

Some members of the Proud Boys now face conspiracy charges in connection to the Capitol riot.

White House Press Secretary Jen Psaki didn't say if the U.S. will follow Canada in calling the Proud Boys a terrorist group but says the government is considering the issue of domestic extremism.

"We of course have a review underway, a domestic violence extremism review underway by our national security team, to take a look at violence and this type of concerning group activity across the country," said White House Press Secretary Jen Psaki. "I expect we will wait for that review to conclude before we make any determinations."

The Department of Homeland Security has a national terrorism bulletin out warning of the possibility of more domestic violence from anti-government extremism.