Can You Get A DWI In A Barbie Jeep? Perhaps 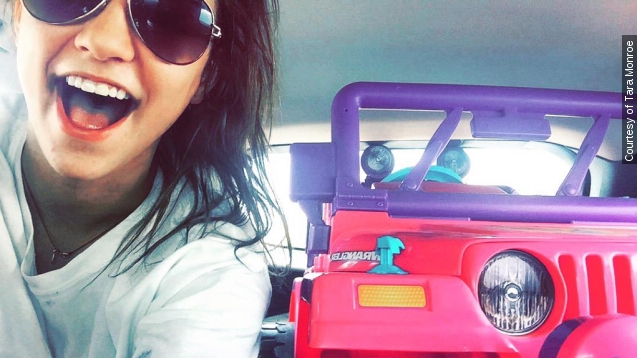 SMS
Can You Get A DWI In A Barbie Jeep? Perhaps
By Grant Suneson
By Grant Suneson
September 4, 2015
A Texas State student is making the best out of a bad situation with a Barbie Jeep. But if she's not careful, things could get more serious.
SHOW TRANSCRIPT

A Texas State student is making the best out of a bad situation and making the day of everyone she comes across. But if she's not careful, things could get more serious.

Tara Monroe got a DWI for refusing a breathalyzer after a concert. When her dad took her car and gave her a bike, she went on Craigslist and found herself a Power Wheels Barbie Jammin Jeep Wrangler. Seriously.

She's quickly become a local celebrity for her odd choice of vehicle. Monroe told My San Antonio, “I’m just happy everyone thinks this is so hilarious.”

And she seems to be taking it all in stride. The 20-year-old made headlines on Time, USA Today and several international news outlets as well.

San Marcos residents have been snapping photos of Monroe cruising in the mini-Jeep, which she named "Charlene" after its original owner.

But we've got a word of warning for her: Tara should probably stay on the sidewalk if she wants to stay out of trouble. Her license was automatically revoked for the DWI, so she's not allowed to drive a motor vehicle.

Let's dig in. According to Texas penal code, a motor vehicle is "a device in, on, or by which a person or property is or may be transported or drawn on a highway."

And a highway is "A main road... available to the public for use for travel or transportation."

From the looks of things, she's kept her fake car off the real streets.

So as long as the Jammin' Jeep doesn't jump into traffic, it should be perfectly legal.