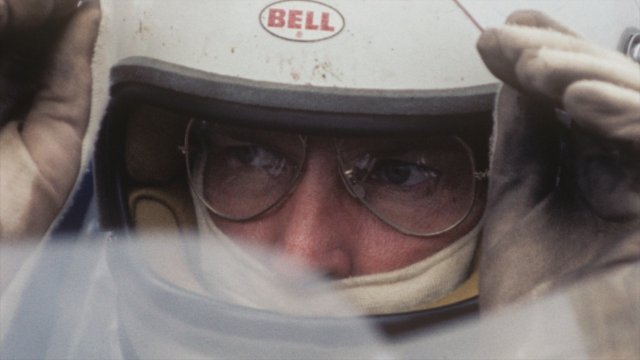 "Is there any physiological difference at all between male and female race car drivers?"

"No, there is not a difference between males and females in terms of their response to being inside the race car."

It's been slow and barely steady, but women have for years been breaking into the car racing industry. In the history of the Indianapolis 500, only nine women have competed. And this year, Pippa Mann was the sole woman driver in the race.

More than 40 years ago, the track looked very similar — but back then, the only woman racer was also the very first.

"The fact that I was a woman was going to be a really big deal."

In 1976, Janet Guthrie — the subject of a new ESPN documentary — became the first woman ever to compete in the Indy 500.

That distinction came with heavy criticism, and the questions about whether women were physically able to race as well as men were making headlines all over the country.

Today, those questions are still being asked.

"There's a big dichotomy in male and female drivers. There just aren't females in the upper leagues. I mean, there's a handful, but it's not equal."

"What started to happen was there was conversations in mainstream media and social media that said females are not strong enough to drive the car."

"We actually had the equipment to answer this question, so we said, let's do it. Let's actually measure males and females ... and see if there's a difference. And there was no difference."

Researcher David Ferguson has spent the past 15 years studying the physiology of race car drivers. A report he co-authored earlier this spring found that there are no differences between male and female race car drivers during competition.

In fact, the study also found that the women in the sample population were performing with the same physiological strain as men with at least 10 more years of experience. Ferguson says more research is being done on what exactly that means, but the hypothesis is that it means women can continue racing longer.

Back in the '70s, you could argue Guthrie was evidence of this. During the 1978 Indy 500, she went so far as to race with a broken wrist, and yet she still came in eighth place.

"Well, I've driven in the International Manufacturer's Championship races, Daytona and Sebring on seven occasions, so I ...."

But despite her successes behind the wheel, Guthrie had to cut her career short in 1980 because she wasn't able to land the sponsorships needed to fund her races — a problem many woman drivers still face today.

But nearly four decades after her last race, Guthrie is still a major figure in the arena of women and sports, and the story of her career is the subject of "Qualified," an ESPN documentary that came out this spring.

Director Jenna Ricker, who attended this year's Indy 500, said Guthrie's story is important in inspiring other women and young girls to enter the field as well.

"A father walked in with his two, I think, twin girls. They were dressed the same, same height. And they were wearing a t-shirt that said, 'Let's Go Racing, Y'all!' And they had their hair in little pigtails and checkered flag ribbons wrapped around them."

"We stopped by, and I said, you know, 'Who are you rooting for today?' And they said they're rooting for Pippa Mann, and they really wanted Pippa to win. And then we told them that we'd made a film about the first woman, and their eyes lit up. 'Who was the first woman?' And I told them, you know, Janet Guthrie, and they could check it out if they wanted to, but it was exciting that there was a woman in the race."