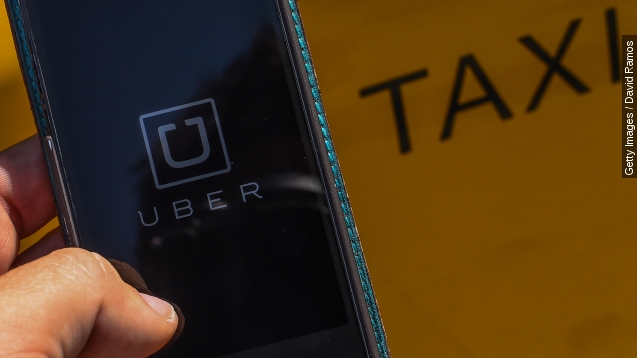 But the strikes Paris has seen over the past week might be some of the worst ever. Protesters have turned over cars, burned tires and blocked access to the city's airports. (Video via BFMTV)

But perhaps most egregiously, they've ticked off Courtney Love, who posted that she had been "held hostage for an hour" by what she called the "French Taliban" and called on French president, Francois Hollande, to "Get [his] ass to the airport." (Video via ABC)

It's not clear if Love was in an Uber-affiliated vehicle at the time, but the BBC reports there have been some 100 attacks on Uber drivers and passengers in recent weeks. (Video via France 24)

Blocking airports isn't a new tactic for Paris cabbies, who've been protesting on and off for more than a year, but the scale of the violence seems new. (Video via France 3)

At the root of the conflict: a law which requires all services to have properly licensed drivers. While it went into effect in October, Uber has appealed it and continued to operate regardless.

That's pretty much Uber's M.O. The service is accused of repeatedly flouting regulatory laws across the globe, driven in part by its rapid growth. (Video via WXYZ)

"The company is five years old, and they're in 250 cities, and there's no way they would be that big if they had gone around and asked regulators and incumbents if it was okay if they joined as well," Re/code's Liz Gannes told PBS.

Still, Uber hasn't really faced the violence France is seeing, with cab drivers allegedly beating up users who break the strike. The service will hope such incidents don't set a precedent. (Video via BBC)