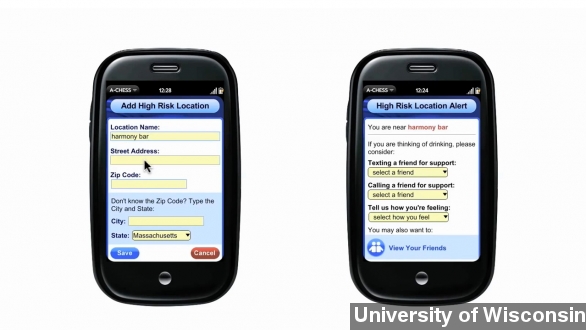 By Mikah Sargent
March 28, 2014
Researchers at The University of Wisconsin create A-CHESS, a relapse-prevention system for alcohol-dependent individuals.
SHOW TRANSCRIPT

Researchers at The University of Wisconsin have created an app that provides alcohol-dependent individuals with what they call a relapse-prevention system. It's proven successful for people post-rehab.

The app, known as A-CHESS, has a built-in library of relaxation audio, a peer social network, and even an event calendar. Counselors can keep track of their patients through a web app, which is linked to the mobile version. (Via Andrew Isham / YouTube)

Counselors work with their patients to log information in the app, including sleep/wake hours, high-risk locations and more. The app can then provide support if a patient nears a high-risk location. (Via NIATxNPO / YouTube)

And that support can come in the form of a live video conference with a counselor, an automated text message asking a friend for support, and more.

The app certainly appears to be helping. In recent clinical trials published in JAMA Psychiatry, the study found that users reported fewer "risky drinking days" — those days in which drinking exceeded a standard number of drinks in a two-hour period — and a higher likelihood of abstinence than those who did not use the app.

The University of Wisconsin says A-CHESS will be available commercially at the end of July. For those battling addiction, the app has been quite a success.

"If this was around ten years ago, there'd still be people that are sober that are using right now ... It's kind of like a comfort system right in your pocket." (Via CHESSwisc / YouTube)