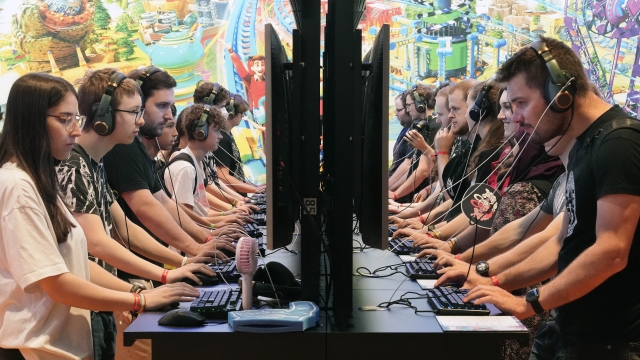 In the face of lockdowns and social distancing, many turned to video games for entertainment and socializing, which sent game revenues soaring to record highs in 2020.

But now that lockdowns are over and the economy's getting a bit fluctuant, game companies are starting to wonder: How much longer can the industry defy gravity?

"It's proven over the years that at times of economic uncertainty for families, that gaming is somewhat resilient to those issues," said Phil Spencer, CEO of Microsoft Gaming.

In general, entertainment has a reputation for being recession-resilient, and video games are no exception. Optimists point to the sector's solid performance during the 2008 economic crisis as proof that even in hard times, people will still spend money on games.

But growth rates and revenue charts don't tell the whole story; the game industry is facing plenty of economic headwinds which could drag down its potential this year and could put an end to a years-long period of growth for the business of video games.

One major problem is production issues. The hangover effects of pandemic-era work disruptions are still rippling through game studios, leading some companies to delay releasing their games. Long-awaited titles like Bethesda's "Starfield" and Nintendo's "Legend of Zelda" have been pushed into 2023, which means they won't be driving sales during the coming holiday season.

These aren't just software issues either — supply chain issues have made it tougher to get the next generation of gaming consoles out to consumers. The shortages of PS5 and Xbox Series X hardware also limits the reach of games made for those consoles.

What's more, people's spending habits are starting to shift away from video games. High inflation rates have consumers less eager to shell out for non-essential purchases, and those that are spending are returning to experiences — like concerts or sporting events — in greater numbers, which leave fewer dollars for video game spending.

All told, there are plenty of reasons for game studios to tighten their belts. But, it's hard to say for sure how badly all these headwinds will hurt the industry.

For one thing, games aren't bought and sold in the same ways anymore. Subscriptions, free-to-play games and perpetually updating live service games give customers plenty of new ways to spend money on video games. Even if players don't want to spend $70 on a new game, they might spend $5 for a new Fortnite skin.

It's tough to know exactly how those models will respond to rising inflation — maybe customers will be more willing to shell out for smaller micro-purchases rather than buy more expensive forms of entertainment, or maybe the big spenders on those games will cut back their gaming budgets to save money.

The gaming industry's future has also become increasingly caught up in the behavior of the larger tech sector. Meta's increasingly-shaky investments in the metaverse, Apple's decision to clamp down on ad tracking on its platform, and Google's shuttering of their cloud gaming platform Stadia all have different effects on video game companies.

Despite the economic turbulence, the overall outlook for the gaming industry is still pretty rosy. Even before the pandemic, video games have been reaching more people in more ways year after year. It'll take more than some economic uncertainty to take that momentum down a level.