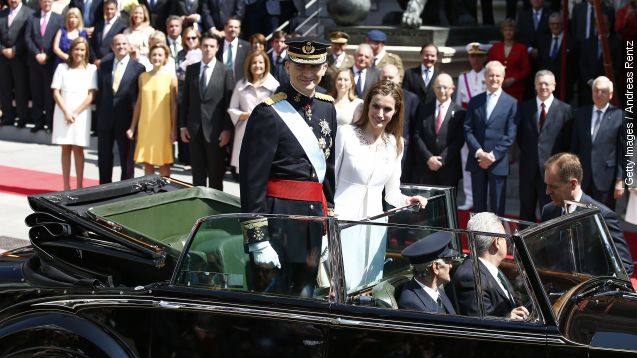 A series of scandals have damaged the image of Spain's royal family. Can the well-liked King Felipe VI restore the monarchy's reputation?

For all the attention the British royal family gets, there’s another overseas monarchy out there that’s every bit as fun to watch.

We’ll start first with Princess Cristina. She and her husband are accused of embezzling millions in public money through his non-profit.

She was already under pressure to give up her rights to the throne as she awaits trial, and now her brother King Felipe VI has stripped her of her duchess title. (Video via Spanish Royal Family)

But even before Cristina’s legal woes, the royal household was dogged by scandal.

Most involved Juan Carlos — Cristina and Felipe’s father. Once one of the world’s most popular monarchs as the man who ushered in Spain's democracy, he abdicated his throne last summer when his approval ratings hit record lows. (Video via Spanish Royal Family)

You see, at a time when Spain was in the middle of an economic crisis, Juan Carlos was making headlines for his spendings habits, like the luxury African safari he took back in 2012.

Not helping the situation is 16-year-old Prince Froilán. From accidentally shooting himself in the foot to reportedly hurling a racist rant  — the prince is living up to his name as Spain’s royal bad boy.

Trying to bring some prestige back to the monarchy is the well-liked Felipe, who in his coronation speech last summer, pledged “a new era for the monarchy” — a monarchy whose future may be tied to the elections this December. (Video via Spanish Royal Family)

If elected, the left-wing, increasingly popular Podemos party has promised to hold a referendum on whether to keep the monarchy.

A poll taken last year showed most Spaniards think such a referendum should be held. But a smaller percentage said they’d actually vote to do away with the crown. (Video via Spanish Royal Family)