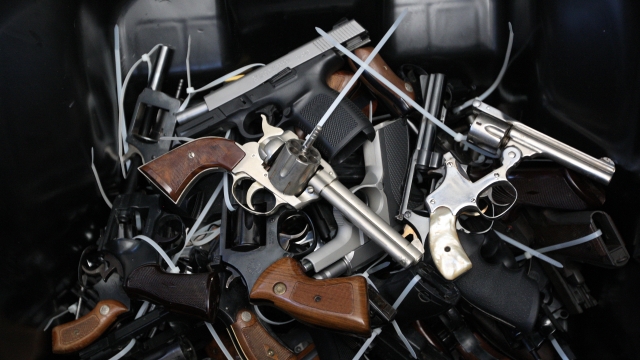 SMS
What California Data Tells Us About 'Red Flag' Laws And Mass Shootings
By Christian Bryant
By Christian Bryant
August 22, 2019
We don't know how well red flag laws work in stopping mass shootings, but new research gives us a first glimpse at data that can determine efficacy.
SHOW TRANSCRIPT

Sometime between 2016 and 2018, a man working at a car dealership in California threatened to shoot his boss and fellow employees if he was fired. He told people he fantasized about killing Muslims and police officers if he had been the Las Vegas shooter. The dealership manager contacted police and, through California's Gun Violence Restraining Order, or GVRO, law enforcement confiscated five firearms owned by the man's wife.

Allison Anderman, senior counsel at the Giffords Law Center to Prevent Gun Violence: "These are laws that allow a person — in some states, just a law enforcement officer, and in other states law enforcement officers and family or household members, or even other people, like health care workers, are able to go to court and say, I am concerned about a particular person. He or she is acting in a way that makes me think that they are dangerous. They're going to hurt themselves or others. … If the court agrees that the person has proof that this person poses a real threat of harm to themselves or others, the court can issue an order that prohibits that person from having guns or buying guns if they don't have any guns."

Researchers at UC Davis found 21 different cases — like the one involving the dealership employee — in which the state's GVRO was used to take firearms away from people who said they wanted to shoot people between 2016 and 2018. That information was obtained through court records of the state's GVROs.

Christian Bryant: "Based on the research, do extreme risk laws work in preventing mass shootings?"

Elizabeth Tomsich, a research data analyst at the University of California Firearm Violence Research Center: "We cannot make any causal claims as we have no idea what would have happened in the alternate universe where no order was issued."

Allison Anderman: "After the massacre in Parkland, Florida, in February 2018, eight more states enacted these laws, and four states plus the District of Columbia have enacted their own this year. This policy has taken off since devastating killings at Marjorie Stoneman Douglas High School last year."

Right now, 17 states and D.C. have some version of red flag laws.

Allison Anderman: "Most of these laws were just enacted last year, so there really hasn't been a lot of time to study their effectiveness. However, California's law has been in effect for three and a half years."

That's why California is a good place to start looking at how effective these laws could be at preventing mass shootings. One of the things that can be inferred from data specific to California is that the law was slow in its implementation. Through UC Davis researchers, Newsy obtained California Department of Justice data on the GVROs issued in the last three years. Looking at the data, you'll see that there was a more than 300% increase in the number of individual orders issued between 2017 and 2018.

Research data analyst and study author Liz Tomsich, who we heard from earlier, attributes California's slow uptake to a lack of awareness and poor training of law enforcement.

There's still not enough data to say that red flag laws alone are effective in preventing mass shootings. But when those laws are used along with other mechanisms for protecting the public, they can help keep firearms out of the hands of people who want to harm themselves or others.

Tomsich: "Another finding key finding from this study was not only the role of GRVOs as a policy mechanism option to prevent mass shootings, but the role of the 10-day waiting period California has between making a purchase and being able to transfer custody or the retailer transfers custody and to the new owner or purchaser. And in three cases, I believe, officers were able to use that 10-day waiting period to file and obtain a GVRO and prevent the acquisition from going through. So the use of those two mechanisms together, providing even more, provide law enforcement as well as members of the public, a little bit of extra time, I guess you could say, in an emergency situation where time counts more than anything."

At least four states — including Ohio, Pennsylvania, Michigan and North Carolina —  have red flag bills moving through their legislatures.