Can President Trump Really Pardon Himself? 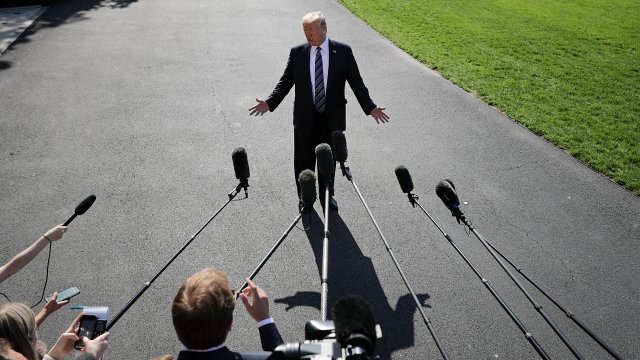 President Donald Trump insists he can pardon himself. But legal experts aren't so clear on the issue.

A controversial tweet from the president Monday morning came alongside more complaints about the special counsel's investigation. So, many are connecting those dots and hypothesizing that Trump would pardon himself if he were charged with something related to the Russia probe.

The Constitution gives the president the "Power to grant Reprieves and Pardons for Offences against the United States, except in Cases of Impeachment." So presidents can pardon federal offenses, but not state ones. And a pardon can't help anyone who gets impeached.

So the issue of whether a president can pardon themselves is matter of interpretation because no president has tried to do it.

Reporters repeatedly asked press secretary Sarah Sanders about Trump's tweet in the Monday briefing, and she repeatedly said it's a non-issue.

"Thankfully, the president hasn't done anything wrong and wouldn't have any need for a pardon," Sanders said.

"And, once again, the president hasn't done anything wrong, and we feel very comfortable in that front," Sanders said.

"The president hasn't done anything wrong. I'm not sure how else I can answer that question," Sanders said.

At this stage, she has a point: The president is not currently facing any criminal charges. But if that changes and he one day pardons himself, this issue is likely to end up in front of the Supreme Court.