Can Lady Gaga Survive As The New Star Of 'American Horror Story'? 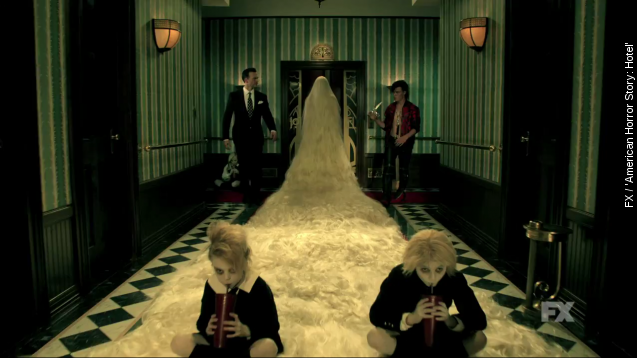 And even though the trailer is quick, it's pretty clear who the star of "Hotel" is.

The clip, titled "Hallways," gives us a glimpse of all the creepy characters we'll see this season.

And it all leads up to a ghostly Gaga clad in a long white dress.

Okay, so that's nothing we haven't seen before. But still, pretty haunting.

Now, we've known for a few weeks the eccentric singer would have a big role in the new season. (Video via Interscope Records / Lady Gaga)

"She owns the hotel, and she is sort of a very wealthy social doyenne who is consumed with art and fashion and people and she has a nefarious plan that is revealed in the first episode and plays out over the course of the season." (Video via FX / "American Horror Story: Hotel")

Of course, "American Horror Story" fans are all used to Jessica Lange leading the terrifying pack during each new installment. She's definitely out for "Hotel" but could be coming back eventually. (Video via 20th Century Fox TV Records / American Horror Story Cast)

So, the question becomes: Can Lady Gaga live up to the horrific high standard Jessica set during the past four seasons?

"Hotel" will be Gaga's first recurring role in a series. But she definitely has some acting experience under all that strange clothing. (Video via The Wall Street Journal)

In case you forgot, she's had cameos in "Machete Kills," "Sin City: A Dame to Kill For," "Muppets Most Wanted" and even "The Sopranos."

"You don't stink of anything I don't like, and you kind of remind me of an old boyfriend, OK?"

And she actually did pretty well in front of the camera. "Sin City" director Robert Rodriguez told E! he "just had" to have her in the flick. (Video via The Weinstein Company / "Sin City: A Dame to Kill For")

"She's a great performer. ... I was blown away by her discipline. She studied acting before she became a singer and you could really tell."

Still, some "AHS" fans are pretty upset that Jessica won't be a part of "Hotel." But Jessica herself has faith the show will still be great with Gaga at the helm.

Looks like we'll have to see how Gaga fares for ourselves. "American Horror Story: Hotel" premieres Oct. 7 on FX.