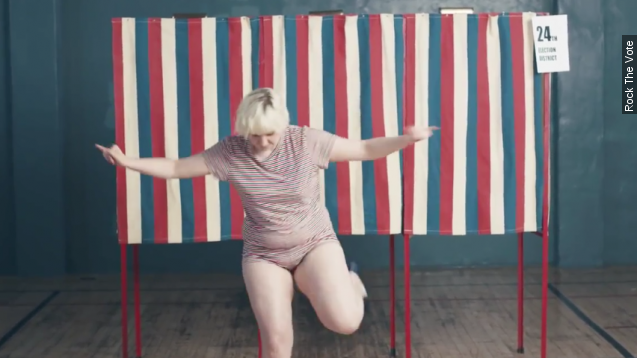 SMS
Can Celebs Help Candidates Win The 2016 Ticket?
By Cody LaGrow
By Cody LaGrow
September 24, 2015
We are more than a year out from the 2016 presidential election, and the Hollywood elite already want you to think about the ballot box.
SHOW TRANSCRIPT

It's happening. Celebrities you had no idea were politically impassioned are getting their clothes ripped off of them to teach us a lesson about voting. Although, I will say this next endorsement is pretty catchy.

"Votes going up on a Tuesday. Register to pick one and be choosy," rapped ILoveMakonnen.

Lena Dunham was choosy enough to endorse Hillary Clinton. On Thursday, she released a preview of a sit-down she did with the former Secretary of State. The self-titled feminist asked a question we'd never expect from her.

"Do you consider yourself a feminist?" asked Dunham.

Don't get me wrong: Voting and political awareness are important. But celebs hopping on the bandwagon just adds to the most campaign coverage we've ever seen this far out from an election date, which is about 400 days away, or as I prefer to calculate it, about 591,800 minutes.

So why are we already seeing Kim K with Hillz?

Kimmy K and Kanye posted their selfie with the Democratic presidential candidate last month. Clinton, now probably spelled with a K, even spoke to Jimmy Fallon about it.

But here's the best part. Researchers don't really know if celebrity endorsements matter. They might even turn voters off. So do yourself a service and get educated, or we can leave the politics to the professionals — like Lil Jon.