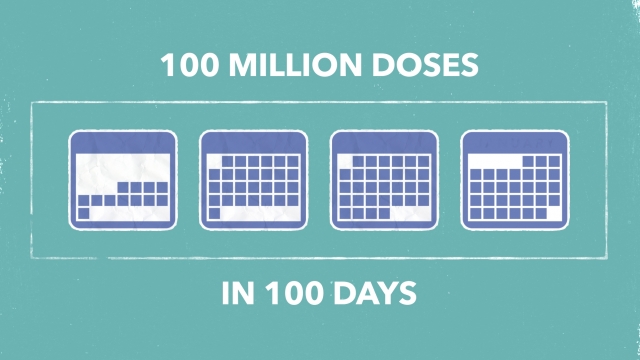 One hundred million COVID-19 vaccinations in 100 days. That's what President-elect Joe Biden promised to do once he's in office.

"The Biden-Harris administration will spare no effort to make sure people get vaccinated," the president-elect said in a speech last month.

The goal is ambitious, especially with early vaccine rollout missing government targets. But it is doable, according to our interviews with public health experts and former top officials.

"The 100 million doses is assuming that everything kind of goes as planned," Dr. William Moss, the executive director of the International Vaccine Access Center at Johns Hopkins University, told Newsy.

"No one has dealt with this kind of issue who's alive today," former Health and Human Services Secretary Kathleen Sebelius explained in an interview.

So let's break down what it would take to administer 100 million doses in 100 days.

When Biden enters the West Wing, two vaccines will have already been approved by the FDA for emergency use, with four others in development. If additional vaccines get the green light, the challenge of meeting this goal would be greatly reduced.

The good news: Vaccine development has moved at lightning speed — and the U.S. has already ordered enough doses to reach this 100 million goal. The bad news: Producing a vaccine takes time so initially, supply will be limited.

"No one's ever made this kind of vaccine in quantity before," said Dr. Eric Rubin, a professor of immunology and infectious diseases at Harvard University. "And we know from other drugs and other vaccines that we learn more about how to make them as we go along."

But this is a hurdle the new president could do something about. He's promised to use the Defense Production Act to compel companies to produce items needed to expand vaccine manufacturing capacity. And he plans to release all available vaccines — a break with the Trump administration's strategy of setting half the supply aside to guarantee second doses are available. Of course, production is only one part of this massive effort.

Distribution — from manufacturers to providers — is another. The Trump administration left most of the logistics in this step up to states, setting up a confusing patchwork of plans.

Along with drafting their own plans, states need to meet the vaccines' unique temperature storage requirements, recruit and train providers to administer the vaccine, set up vaccination sites, track inventory and who's been vaccinated — whether they received their first or second dose and from which manufacturer.

"We've invested billions of dollars — put a couple of hundred million dollars out into actually administering it. We need more resources to go out to states to be able to do this. Otherwise, we're not going to be able to do much of anything in 100 days," said Dr. Marcus Plescia, chief medical officer for the Association of State and Territorial Health Departments.

And, there's one more crucial step: Even if the U.S. had 100 million doses available, administering them is about public demand as much as supply. People need to want to get vaccinated, and health officials have a big job to do when it comes to boosting confidence in the vaccine, so that these shots actually end up in arms.

"We are at risk, I would say, given the baseline rumors and misinformation about vaccines in general in this country," Moss explained. "Fighting that is going to be a big part of our way forward."

Public health experts say this communication is especially important among communities of color who are bearing the disproportionate burden of the pandemic but may be skeptical of public health systems due to historic and ongoing racism and discrimination.

"I think that this is another case where the rich get richer. If you're plugged in, if you have your own private doctor, or you're or you're a patient within a large health care system, you're probably all set," Rubin said. "But if you are not very engaged with health care, you're the person who could miss out on both the first and the second dose of this vaccine."

With time, the price and the speed with which scientists can produce the vaccine will increase dramatically, but we're not there yet.

"As long as this virus is anywhere in the world, no American is safe because viruses have no boundaries and no borders," Sebelius, who served under President Barack Obama, said.