Can A Hug Cure Ebola Fears? 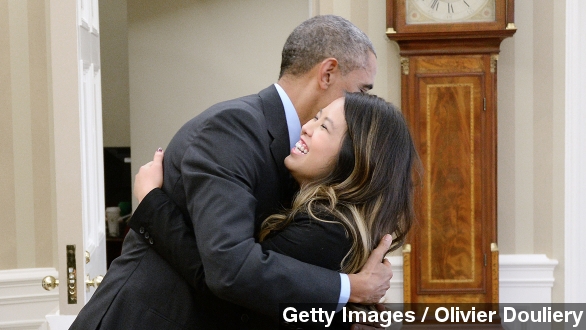 By Christian Bryant
October 24, 2014
Along with Nina Pham's all-clear diagnosis from her doctors, the Dallas nurse was also pictured hugging the president the same day she was discharged.
SHOW TRANSCRIPT

PRESIDENT OBAMA VIA THE WHITE HOUSE: “Today I want to speak to you directly and clearly about Ebola.”

Ever since Ebola made landfall in the U.S., the Obama administration and health professionals have been trying to curb fears about Ebola — most of them stemming from misinformation.

Maybe that’s why this moment Friday was so big. Dallas nurse and former Ebola patient Nina Pham was declared Ebola-free and was later embraced by President Barack Obama in the Oval Office.

And that moment had everyone talking.

CNN: “What we heard from the White House was that no extra precaution was taken.”

FOX BUSINESS: "There was no fear.”

AL JAZEERA: “Embracing President Obama in the Oval Office, a clear message that the White House is trying to send.”

...Or messages. Let’s be clear: this move was a pretty obvious PR stunt by the White House — no reporters were allowed in the meeting, only photographers and they snapped tons of pictures. But it was a move that could help curb fears about Ebola for a number of reasons.

JOSH EARNEST VIA THE WHITE HOUSE: “He is the president and he was not at all concerned.”

And most Americans shouldn’t be concerned either.

Researchers have reiterated the virus doesn’t just randomly jump from person-to-person. The hug demonstrated that a cured patient isn’t in danger of getting anyone else infected.

Maybe this is a way to show that, despite fears about the virus, Ebola survivors should be welcomed back into society without reservation.

An all-clear diagnosis for Pham and Amber Vinson, the other Dallas nurse who was declared Ebola-free this week, is hugely significant given that they were infected by Thomas Eric Duncan — the only Ebola patient in the U.S. to die from the illness. (Video via KDFW)

Duncan’s treatment and the infection of two of his nurses raised questions about America’s preparedness to deal with Ebola. (Video via MSNBC)

The hug between President Obama and Pham obviously won’t get rid of Ebola, but it could be just another small victory in helping cure Americans of their fears surrounding this deadly disease.