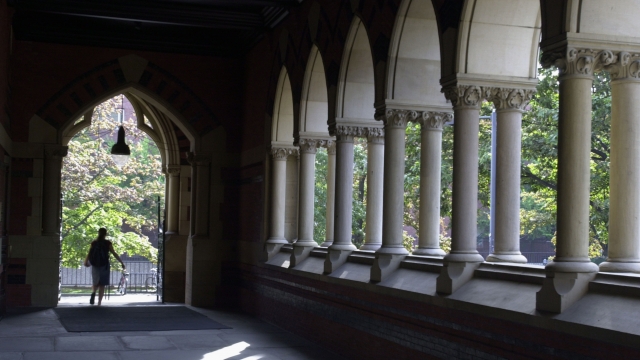 By Meg Hilling
September 5, 2019
The campaign stands on the belief that Harvard University should not benefit from investments linked to the prison industrial complex.
SHOW TRANSCRIPT

Cut ties – completely. That is the message a student-led campaign at Harvard University is pushing, demanding the school end its relationships with companies profiting from the criminal justice system.

As students head back to school, the Harvard Prison Divestment Campaign or HPDC is pushing this message, hoping to capture national attention.

Launched in early 2018, the campaign believes Harvard University should not benefit from investments linked to the prison-industrial complex. That's the term used to describe the overlap in interests of government and industry that use surveillance, policing and imprisonment as solutions to economic, social and political problems.

The idea is that by having any financial ties to companies involved in this system, the university is therefore involved in “the exploitation of incarcerated people, their families and communities and helping to perpetuate the American institution of slavery in spirit and in practice,” according to the campaign.

What it comes down to is this. The campaign wants the Harvard Management Company to:

1. Divest all of the university’s holdings in companies profiting from the prison-industrial complex.

2. Reinvest a significant amount of the divested funds into groups led by people directly impacted by the prison-industrial system in the Cambridge/Boston area.

This concept of universities divesting from the prison system is far from new. Columbia University was the first university in the country to divest its endowment from the private prison industry, having done so in 2015.

But just because this movement has worked for other universities, and even though Harvard has divested from industries before, it does not mean the group will succeed.

The private prison system is a multi-billion dollar industry. According to a report by the Sentencing Project, it held 8.5% of all prisoners in the country in 2016.

CoreCivic, one of the largest private-prison operators in the country, dismissed the campaign, telling NBC News it was just "false information spread by politically motivated special interests.”

The university hasn't commented much on the campaign, or how much it specifically has invested in the prison system. After meeting with members of the campaign In April, Harvard University President, Lawrence S. Bacow, reportedly said the university’s endowment holds investments of about $18,000. The campaign says that number is inaccurate, estimating that number is probably closer to $3 million.

For now, a lot remains to be seen. Harvard's endowment fund is estimated to be $39.2 billion. Only $425 million is believed to be made public, making it difficult to know for sure, what the other $38.775 billion or so is being used for.