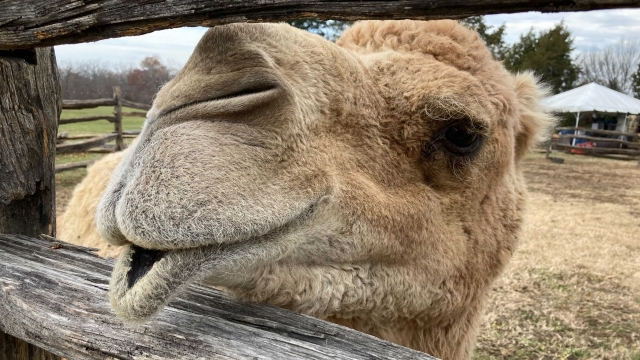 It attracts visitors from around the world, eager to get a peek at history--and Aladdin the Christmas Camel.

Aladdin, who has also appeared in petting zoos and GEICO events, is only on the estate during the holiday season.

Mount Vernon's Director of Character Interpretation Tom Plott said, "he is a character, let me tell you. He's a lot of fun."

Aladdin's presence on the estate continues the Christmas tradition that Washington started over 200 years ago.

"In 1787, George Washington paid a man 18 shillings to bring a camel to Mount Vernon. George Washington loved exotic things. He paid to see a lioness, an elephant. And when he heard that there was a man coming through Alexandria with a camel, he was like, I got to see it," Plott said.

But the estate has more than just Aladdin; there are horses, hogs, and sheep throughout the property.

"Washington always thought of himself first as a farmer," Vice President of Media and Communications Matt Briney said. "He really thought it was important as a farmer who could do these things to do agricultural pursuits and advance American farming...We want to represent Mount Vernon as it was in 1799. So, if Washington were to come back today, we were hoping that the mansion, the grounds, it would all be something he’d recognize."