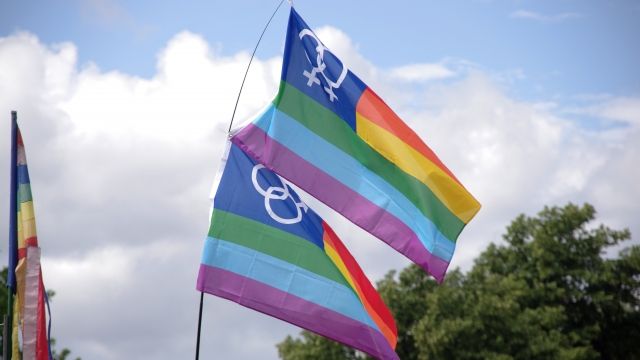 SMS
Calls To LGBTQ Suicide And Crisis Hotlines Spike After Election Day
By Ethan Weston
By Ethan Weston
November 12, 2016
A crisis and suicide prevention group for LGBTQ youth said its call volume doubled and that 95 percent of callers wanted to talk about the election.
SHOW TRANSCRIPT

Crisis and suicide hotlines have been flooded with calls and texts since the presidential election was decided.

A spokesperson for the service said that "scared" was one of the most common words they came across, and it was often associated with "LGBTQ."

The Trevor Project — a crisis and suicide prevention organization for LGBTQ youth — said its call volume doubled and that 95 percent of those calling wanted to talk about the election.

And according to its Facebook page, Trans Lifeline received "more calls than ever before" the night of the election.

In July after the Pulse nightclub shooting in Orlando, Trump told a crowd at the Republican National Convention that if elected, he'd work to protect LGBTQ individuals "from the violence and oppression of a hateful foreign ideology."

But Trump's website doesn't list any official LGBTQ policies, and some fear he will overturn several protections signed by President Barack Obama, including sections of the Affordable Care Act and an executive order that repealed the ban of openly LGBTQ individuals serving in the military.

There have been several reports of suicides by LGBTQ people linked to fear and anxiety over the election results.

A 2014 report found that 41 percent of transgender people surveyed had attempted suicide, nearly 10 times the rate for the U.S.' general population.