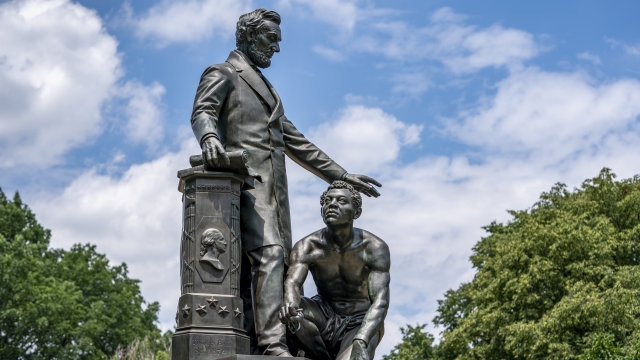 SMS
Calls Grow To Remove Abraham Lincoln Statues In D.C. And Boston
By Ahmed Jawadi
By Ahmed Jawadi
June 26, 2020
​Both the Emancipation Memorial in Washington and its copy in Boston are facing growing public scrutiny over their depictions of Black people.
SHOW TRANSCRIPT

Calls are growing for the removal of twin statues depicting former President Abraham Lincoln standing over a freed slave.

Both the original Emancipation Memorial in Washington and its copy in Boston have stood for over 100 years. The statue is intended to serve as a memorial to Lincoln's emancipation of slaves in the U.S. But critics say it perpetuates an image of subservience and is ultimately demeaning in its portrayal of Black people.

Congresswoman Eleanor Holmes Norton called the statue's depiction "problematic," adding that it "fails to note in any way how enslaved African Americans pushed for their own emancipation." She also criticized the fact that the statue was designed without any input from Black people — despite them having commissioned and completely funded its construction — and said she will soon introduce legislation to relocate the D.C. statue to a museum.

Earlier this month, Boston native Tory Bullock started a petition calling for the statue's removal in Boston, saying: "I've been watching this man on his knees since I was a kid. It's supposed to represent freedom but instead represents us still beneath someone else. I would always ask myself 'If he's free, why is he still on his knees?' No kid should have to ask themselves that question anymore."

Bullock's petition caught the attention of the Boston Art Commission, which is expected to hold a vote on the statue's fate following a public hearing next week.

"It's the position of he's getting up; he's being freed by Abraham Lincoln," President Trump said. "And I can see controversy, but I can also see beauty in it. ... And they want to take it down. And, you know, we can take things down, too. I can understand certain things being taken down. But they ought to go through a process legally. And then we take it down; in some cases, put them in museums, or wherever they may go."