Calls Grow For Theresa May To Resign Over Latest Brexit Plan 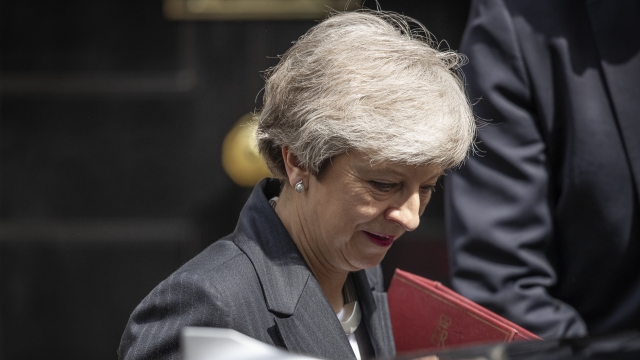 SMS
Calls Grow For Theresa May To Resign Over Latest Brexit Plan
By Ahmed Jawadi
By Ahmed Jawadi
May 22, 2019
​Multiple news outlets report that many in May's own cabinet are calling for her to cancel the next vote and to step down as prime minister.
SHOW TRANSCRIPT

British Prime Minister Theresa May is facing growing calls from both opposition leaders and members of her own party to resign after unveiling her latest Brexit plan.

The newest version of May's thrice-rejected Brexit deal includes offering lawmakers a chance to vote on whether to hold a second Brexit referendum. The "new plan" also includes a new workers' rights bill, a vote on having a temporary customs union with the EU, and a commitment to find an alternative to the Northern Ireland backstop by 2020.

Despite May's attempt to gain more bipartisan support for her withdrawal agreement, both Labour and Conservative parliament members were quick to express their disapproval, for different reasons. While Labour party members found May's concessions as insufficient, many Conservatives felt she went too far, especially with the possibility of the country holding a second referendum.

In fact, one of her cabinet members resigned, saying she doesn't believe the government will be able to deliver Brexit like the voters wanted.

Multiple news outlets have reported that many in May's own cabinet are calling for her to cancel the upcoming vote and to step down as the country's prime minister. Labour Party leader Jeremy Corbyn brought up the inner-party conflict during a House of Commons meeting on Wednesday.

"The multiple leaks reported from the cabinet yesterday show the Prime Minister couldn't even get the compromise deal she wanted through her own cabinet," Corbyn said. "And it's clear that the shrunken offer that emerged satisfied no one – not her own back benches, not the DUP, and mister speaker, not the official opposition either."

Sources told the BBC Wednesday May has refused to resign despite the recent backlash from her party. Earlier this year, May said she would step down if her Brexit deal were to pass in the last House of Commons vote. And earlier this month, she promised to step down if her deal is rejected again. May said her new plan is set to officially be published on Friday, with a House of Commons vote on the bill scheduled in the first week of June.