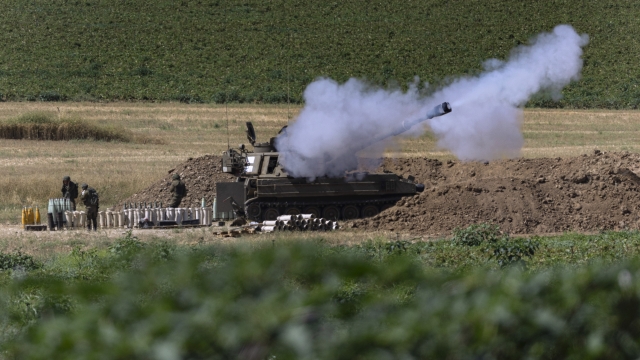 Calls for a cease-fire between Israel's military and Hamas continue to grow.

The United Nations General Assembly is set to discuss the violence tomorrow. And European Union leaders say both sides need to put down their weapons now.

"The priority is the immediate cessation of all violence and the implementation of a ceasefire. Not only agreed, but to implement a ceasefire," said European Union head of foreign affairs and security policy, Josep Borrell.

Despite international calls to end the violence, there are no signs that will happen anytime soon.

Israeli airstrikes killed at least six people in Gaza today. At least 219 Palestinians have been killed during the conflict, including more than 60 children, according to Gaza's health ministry.

Israel says most of those killed have been militants. It says it hit 40 Hamas targets overnight and says more than 3,700 rockets have been fired toward it from Gaza since the conflict began.

Hamas claimed responsibility for a rocket attack that killed two people on an Israeli farm Tuesday.

Meanwhile, in the U.S. the Biden administration is facing more criticism for its handling of the conflict.

Protesters gathered in Dearborn, Michigan yesterday during President Biden's visit to the city. They say the White House needs to do more. But the administration is defending its approach.

"Our focus and our strategy here is to work through quiet, intensive diplomacy. And he's been doing this long enough to know that the best way to end an international conflict is typically not to debate it in public," said White House Press Secretary Jen Psaki. "So we will continue to remain closely engaged behind the scenes."

But there's growing frustration that, behind the scenes, diplomacy isn't working.

From Washington, D.C. to Los Angeles, demonstrators have rallied in support of Palestinians impacted by the conflict.

In some parts of the world, antisemitism has taken center stage at demonstrations against Israel. In the U.K., arecent video showed a group of men chanting against Jews. Prime Minister Boris Johnson called it "shameful" and said it has no place in society.