Calls For Calm Ahead Of Ferguson Grand Jury Decision 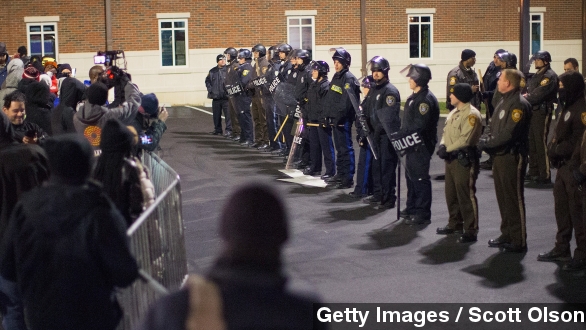 SMS
Calls For Calm Ahead Of Ferguson Grand Jury Decision
By Jake Godin
By Jake Godin
November 21, 2014
Ferguson and cities around the nation are preparing for protests of a grand jury decision on whether to indict the officer who killed Michael Brown.
SHOW TRANSCRIPT

A grand jury decision on the fate of the police officer who fatally shot Michael Brown in Ferguson, Missouri, earlier this year could come any day now. An already tense climate has gotten even more so.

Three protesters were arrested Thursday night as, for the second night in a row, they clashed with police in front of the Ferguson Police Station. Five were reportedly arrested Wednesday. (Video via CDN News)

To help alleviate some of the tension on the Ferguson police, CNN is reporting that Darren Wilson, the officer who killed Brown, is planning to resign as soon as Friday — though that might not happen if he's not indicted.

The protests follow Missouri Gov. Jay Nixon's declaration of a state of emergency on Monday as a precaution in case the grand jury rules not to indict officer Wilson.

Those protests aren't expected to be limited to just Ferguson, though. The Ferguson National Response Network shows that protests on the day of or the day after the grand jury decision are planned in dozens of cities nationwide. One is even planned in Toronto, Canada.

"These struggles go to the heart of who we are and who we aspire to be," he said in that message.

At least one police chief in Boston already seemed to have that in mind, telling the Boston Herald his officers won't be showing up to any protests dressed in the full riot gear typically seen on officers in Ferguson the past few months.

And Saint Louis Forward, a movement aimed at easing tension in the region, released a PSA with Michael Brown's father asking people to refrain from violence, whatever the grand jury's decision might be.

KSDK reports even local schools are preparing for the decision by sending notes to parents outlining their planned responses to the announcement. Schools will apparently keep students from leaving until their parents pick them up if things get bad enough.

Although no specific date has been given for when the grand jury will make its decision, it's expected to give law enforcement 48 hours to prepare before it becomes public.