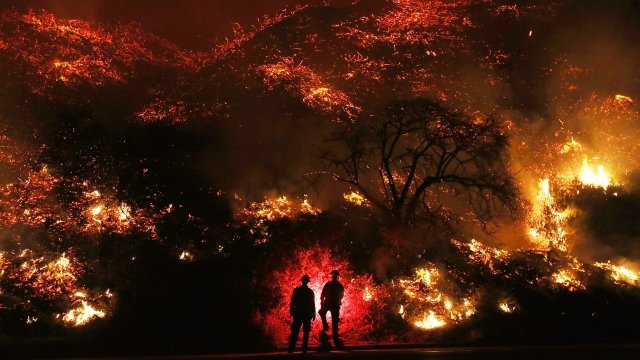 SMS
After Wildfires, Rain Forces Southern California Residents To Evacuate
By Lindsey Pulse
By Lindsey Pulse
January 9, 2018
The first major storm of the year is prompting fears of flash floods, mudslides and other hazards.
SHOW TRANSCRIPT

People in parts of Southern California are being ordered to evacuate. This time, it's because of rain.

The first major storm of the year is rolling in, and authorities are warning residents about flash floods, mudslides and other hazards.

The storm is hitting some of the same areas ravaged by wildfires near the end of 2017.

And that's what makes the situation more dangerous. The wildfires that engulfed hundreds of thousands of acres last year took vegetation and protective brush along with them, leaving the areas more susceptible to mudslides and debris flow.

Officials say they've already had to rescue people from vehicles and buildings. They also report waist-deep mudflow and downed trees and wires in some areas.