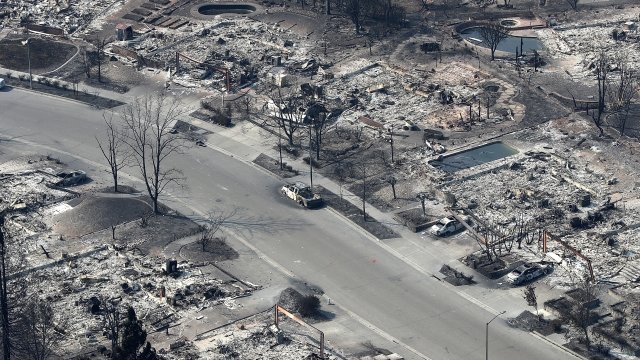 The California Department of Insurance said Thursday the flames caused more than $1 billion in losses across the region.

The wildfires that scorched Northern California this month were some of the deadliest recorded in the state. And the economic toll will likely be devastating, too.

The California Department of Insurance said Thursday the flames caused at least $1.045 billion in losses across the region. That number is based on claims from eight insurance companies, and it's expected to go up as more claims are filed and processed.

So far, victims have reported about 600 commercial property losses and over 3,000 auto losses. For people's homes, claims indicate over 4,000 were partially damaged and that nearly 5,500 were destroyed.

As of Friday, the fires had burned more than 245,000 acres and left 42 people dead. Officials said thousands of firefighters were still battling nine large blazes.

Northern California Firefighters Catch A Break As Winds Ease Up

The wildfire situation in northern California is slowly improving, but there's still a lot of work to do.

The damaging wildfires are the latest costly disaster to hit the U.S. this year.

According to estimates from Accuweather, Hurricanes Harvey and Irma could have a combined economic cost of $290 billion.

And damage estimates for Puerto Rico from Hurricane Maria range between $30 billion and $95 billion.