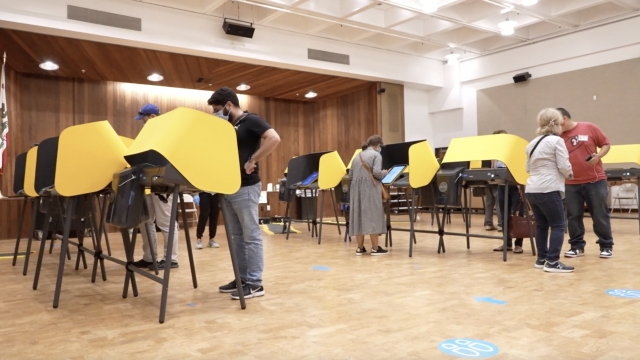 If it's a close vote, it could be a warning sign to Democrats of the fragility of their most coveted posts – and not just at the state level.

California voters are deciding whether to kick their first-term Democratic governor out of office.

"I want California to not have this Republican take-over happen," she said. "I'm disgusted by some of the Republican candidates and what's happening in our country."

"Over the last year I was considered non-essential," Sodha said. "So I was shut down, whereas in other states I could have been operating. So I was excited for the recall and I did vote to recall Newsom."

Gavin Newsom – fighting for his job against a slew of candidates – trying to unseat him. Leading the pack – Republican Larry Elder a candidate following the Trump playbook and refusing to commit to accepting the election results.

"I think the majority of people are going to vote to recall Gavin Newsom," Elder said.

Newsom said: "I mean if anyone thinks that Trumpism is dead, cause Trump lost the election, be disabused. Come out to California. This is their playbook."

Newsom has a comfortable approval rating, but Democrats feared until recently that his supporters – might not show up. At a polling place near Los Angeles Tuesday, voters did.

"I like him but, here's the thing – he's not doing enough, you know what I'm saying?" Vasquez said. "We have to say no, because I don't want the other guy (Elder) to get in."

"I'm more nervous that some of these social policies are going to continue, and that the government thinks that it can just throw money at things and those problems are going to go away," Snyder said.

All 22 million California voters – got a mail-in ballot and while many won't come back – the number that do could make results – slow to come in.

Nationally – the vote could be a galvanizing victory for Republicans, reaffirming the effectiveness of the Trump mantra in the party.

A Newsom victory could highlight the limits even an excited Republican bloc has in blue California.

But if it's close, it could also be a warning sign to Democrats of the fragility of their most coveted posts – and not just at the state level.