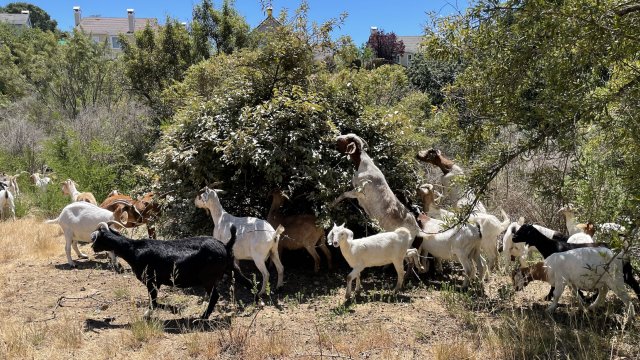 Landowners are turning to a unique, environmentally-friendly tool to clear debris: herds of goats.

From the farms of central California, to the rocky hills of the Bay Area. This herd of more than 500 dairy and African Boer goats is hard at work.

They’re an unconventional-- but effective-- tool to stop fires.

"We built the fence probably, I'd say probably about five acres.  Looking at the brush and everything like that, it'll probably be a couple of days here," Derek Ciccarelli, Goat Transporter, Living Systems Management.

They clear away brush-- eating it before it can become fuel for fires. And they eat a lot. A single 100-pound goat can chow down 12 pounds of green brush in a day. So do the math. There are about 560 adult and baby goats out here-by the end of today, they’ll clear 6,700 pounds.

"There’s plenty of work in California,"

These goats are just some of Mike Canaday’s herds.  At his Coalinga, California ranch, some 10 thousand sheep and goats wait for their turn to ride the trailer to their latest deployment. Just the past couple of years, with wildfires intensifying interest in large herds to cover vast stretches of land, has his business booming.

"There's some that the firebreaks that we cut with the goats stop the fire. When you can change people's lives in that way, it's an emotional thing that they don't have to go through. And it's just huge for us," he said.

The goats can stretch their necks up to 7 feet, biting branches and low lying leaves. They eat poison oak and can clear rocky cliffs -- something other livestock can’t do. And it's easier to control where the goats cut a fire break,  unlike controlled burns -- another method of removing wildfire fuel. All that's needed is a fence, a shepherd, and a couple of dogs.

All of this brush is all fuel for wildfires. Hundreds of public agencies, businesses, and private property owners across the west have turned to these goats, because to them-it's all a buffet.

Jeff Weiss, Public Information Officer, Caltrans Sonoma County "The firebreak that the goats leave is much better than mowing or using herbicides."

Jeff Weiss is with The California Department of Transportation, which began to use just a handful of goats to reach rocky areas like bridges. It worked so well, they’re now bringing in even larger herds on the sides of highways.

"The fires are more intense. The fires actually can jump the highway. And even if they couldn't, if a fire starts on one side of the highway, it can go miles in one direction or the other, depending where the spark landed."

They’re deploying ahead of what’s likely to be a horrific wildfire season. The drought here is so bad, the risk level for the southwestern United States has been stuck at “critical” for weeks. In California,  every county in the state is in moderate to exceptional drought. Exceptional is the highest level.

"Even in non drought years, we have fires, but in drought years there, they're wicked and they cause a lot of damage, harm a lot of people and ruin the air quality for hundreds of miles," Weiss said.

A feast for goats. A lifesaving tool for humans. It’s the new reality in California. For Newsy, I’m Lindsey Theis.