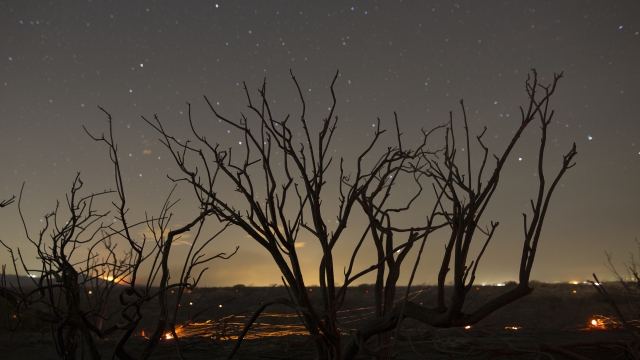 SMS
Droughts Have Seriously Damaged California's Tree Population
By Lindsey Pulse
By Lindsey Pulse
November 19, 2016
Since May, an estimated 36 million trees have died in the state.
SHOW TRANSCRIPT

After a yearslong California drought, an "unprecedented" number of trees are dead up and down the coastal state.

And that poses a huge threat to local communities.

It's estimated 36 million trees have died since May, which would put the total number of dead trees in the state at more than 102 million.

SEE MORE: What's Killing Us? WHO Blames 1 In 4 Deaths On 'Unhealthy Environment'

Those dried-up trees fuel wildfires. Big blazes have burned over 140,000 acres in 2016 alone. To fight the problem, officials are trying to use the trees for lumber or for fuel in energy plants.

A majority of the dead trees are in the Sierra Nevada region, but they've also been found in northern California.

Authorities are predicting the die-off will last at least another couple of years. Even if California got an unusually high amount of precipitation, it wouldn't do much to curb the damage for some time.