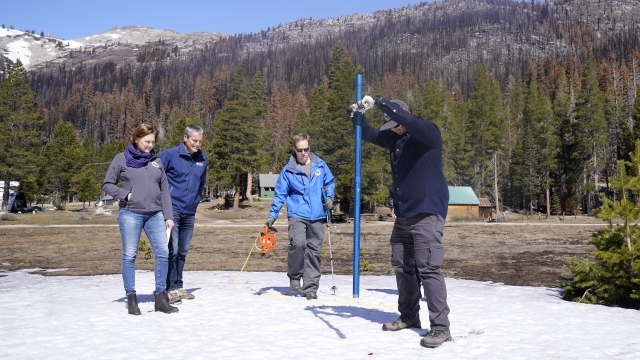 It didn’t take long to conduct the snow survey near South Lake Tahoe.

There should be five feet of snow, but there’s almost none.

California’s Sierra Nevada Mountains that usually have snow-capped peaks aren't as full as they should be.

The winter started out with a blizzard, with the 17 feet of snowfall in December almost setting a record.

It was exactly what the golden state and western U.S. needed after two years of drought.

But then, it stopped. January, February and March typically set the wet season, but this is now the driest on record.

The storms early in the season did help keep things from being catastrophically dry, but it's still very dry, making a critical situation.

The snowpack dwindled, as did the hopes of snapping the mega-drought.

At Phillips Station, the official snow pack measurement site near South Lake Tahoe, the water resources crew trudged through mud where the snow should be. Just a month ago there was five feet of snow on the ground.

The measurements are dropping from 202% above average after the December snows to just two-thirds of the normal measurement last month.

Now there's been just 2.5 inches of snow across the state — the snow pack is at just 38% percent of normal.

"This is definitely a third year of drought for pretty much all of California," said Jay Lund, a professor at the University of California Davis Center for Watershed Sciences.

California needs the snow to melt, but not yet. The state gets a third of its water from the snow pack. It runs down the mountain sides and makes its way into the reservoirs, many of which are already below normal levels.

"It's going to be like last year," Lund said. "Maybe not quite so bad in some places, maybe worse in a few places."

58% of the country in some level of drought, and 100% of California is suffering.

This third year at this level and magnitude is somewhat unprecedented for modern California.

It's not alone. Nevada and Utah are also completely in the grips of the mega-drought.

Federal officials are already cutting back water distributions to farmers this year.

State officials are making their plans for the year based on the state’s final snow pack measurement, which is likely going to be low.

The little bit of runoff is not going to be enough to recharge the reservoirs in the state, which will lead to further cuts to farmers and residents.