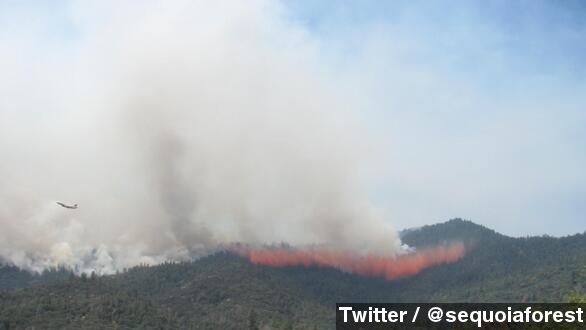 By Jasmine Bailey
June 15, 2014
At least 500 people have been evacuated from their homes near Bakersfield, CA as the Shirley Fire continues to grow.
SHOW TRANSCRIPT

A fast moving wildfire has engulfed more than 1,000 aces in California and forced hundreds of people to evacuate their homes as firefighters slowly work to battle the blaze.

"It is being called the Shirley Fire. The fire started Friday night in a remote area south of highway 155." (Via KCAL)

Saturday evening the Sequoia National Forest tweeted 11 thousand gallons of retardant was dropped on the fire, located about 30 miles from Bakersfield. (Via Twitter / @Sequoiaforest)

And the Red Cross Central Valley sent volunteers to set up shelter near Lake Isabella. (Via Twitter / @redcrossCV)

"Officials warn that smoke could cause respiratory problems for some people in the area. Officials at this point don't know what sparked the fire." (Via KESQ)

As of Sunday the National Wildfire Coordinating Group reported the fire has grown to 1,800 acres and is 10 percent contained. Also reporting, "Prolonged drought and dry fuel conditions are influenced by fire behavior on the Shirley Fire."

And according to AccuWeather, theres a chance the fire will continue growing as, "through Wednesday, winds may gust up to 30 mph, complicating firefighting efforts." So far there are no reports of injuries.