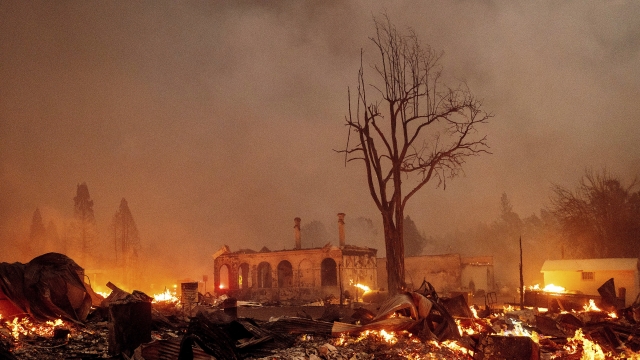 The Dixie wildfire raged through California's forests for several months. It burned out of control as it swept through five counties. The blaze started when a tree fell on an electric power line.

The fire scorched 963,000 acres in three national parks and forests, making it the second-largest wildfire in the state's history.

"If you take this fire line, it will stretch from Oregon to Mexico. That's a lot to patrol, but we're in there doing the best we can," said Tony Brownell, operations section chief of the Dixie Fire Incident Command.

Two thousand firefighters and personnel battled the blaze since mid-July. Despite their attempts, the fire kept growing because of extensive drought conditions and hot, windy weather.

"We're expecting temperatures to be around 100 degrees over the fire area, with humidities dropping all the way down into the single digits and teens, so very, very dry and hot air out there," said Zach Tolby, incident meteorologist for the Monument fire.

The Dixie fire destroyed the small town of Greenville. It gutted the downtown, burning down businesses and homes.

"It made a 13-mile run and it's 6 miles wide. That is a lot of acreage in a short amount of time. It was very intense fire behavior," said Brownell.

The weather patterns eventually changed and became less favorable for the fire to spread. The winds calmed and the temperatures dropped. The changes gave firefighters the upper hand.

The fire is now almost 95% contained. The crews are working to extinguish hot spots and rebuild fire lines.

Climate change and drought extended the fire season by up to 75 days.