Western Flames Spread As California Sees Its Largest Fire Of 2022 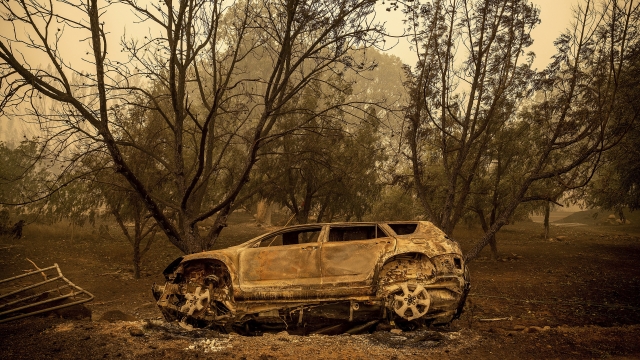 Crews battling the largest wildfire so far this year in California braced for thunderstorms and hot, windy conditions that created the potential for additional fire growth Sunday as they sought to protect remote communities.

"The fuel beds are so dry and they can just erupt from that lightning," Freeman said. "These thunder cells come with gusty erratic winds that can blow fire in every direction." 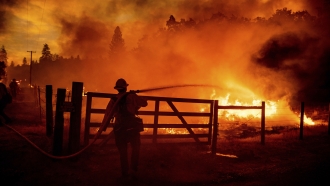 The blaze exploded in size to more than 80 square miles just two days after erupting in a largely unpopulated area of Siskiyou County, according to a Sunday incident report. The cause was under investigation.

The blaze torched trees along California Highway 96, and the scorched remains of a pickup truck sat in a lane of the highway. Thick smoke covered the area and flames burned through hillsides in sight of homes. The fire Sunday cast an eerie, orange-brown hue, in one neighborhood where a brick chimney stood surrounded by rubble and scorched vehicles.

A second, smaller fire just to the west that was sparked by dry lightning Saturday threatened the tiny town of Seiad, Freeman said. About 400 structures were under threat from the two California fires. Authorities have not confirmed the extent of the damage yet, saying assessments would begin when it was safe to reach the area.

A third fire, which was on the southwest end of the McKinney blaze, prompted evacuation orders for around 500 homes Sunday, said Courtney Kreider, a spokesperson with the Siskiyou County Sheriff’s Office. The office said crews had been on the scene of the fire since late Saturday but that the fire Sunday morning "became active and escaped its containment line."

California law enforcement knocked on doors in the towns of Yreka and Fort Jones to urge residents to get out and safely evacuate their livestock onto trailers. Automated calls were being sent to land phone lines as well because there were areas without cell phone service.

Scientists say climate change has made the West warmer and drier in the past 30 years and will continue to make weather more extreme and wildfires more frequent and destructive.