California's Devastating Mudslides Are A Product Of Historic Wildfires 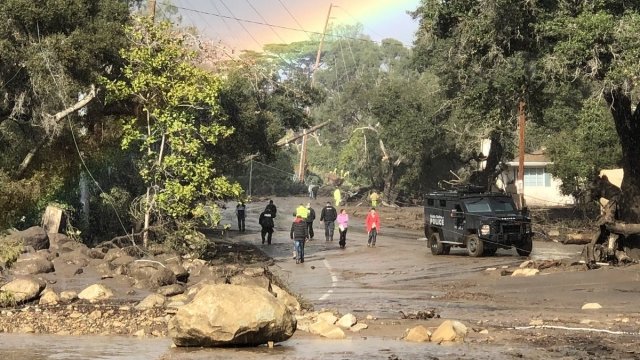 The wildfire-mudslide one-two punch has hit California in the past, but December's historic fires made 2018's mudslides particularly bad.

When wildfires raged across California in December, they didn't just cause millions of dollars of damage. They also created the perfect conditions for the devastating mudslides that followed.

When wildfires scorch an area, they damage plants, which play a key role in keeping the soil in place. They also change the soil itself, reducing the amount of water the land can absorb and how quickly it can absorb it. In some cases, dirt can even become water-repellent.

Parts of the California wildfires are so hot that they're helping form aptly named pyrocumulus clouds.

When rainfall eventually hits those dried out areas, the land can't handle the water, and it begins to tumble down hillsides, along with debris. It doesn't take much rain to trigger this. Southern California has seen slides occur with as little as 7 millimeters of rainfall.

And those flows can happen before anybody sees the warning signs. The U.S. Geological Survey does have models to estimate the likelihood and size of a debris slide. But it takes a few days to get solid results, and in some instances undetected flows can happen within 30 minutes of the start of a storm.

For now, California's mudslides look to be finished, as most of the storm systems have left the area. From here, crews are trying to figure out how they're going to get rid of all the mud that's left hundreds trapped and many more missing.