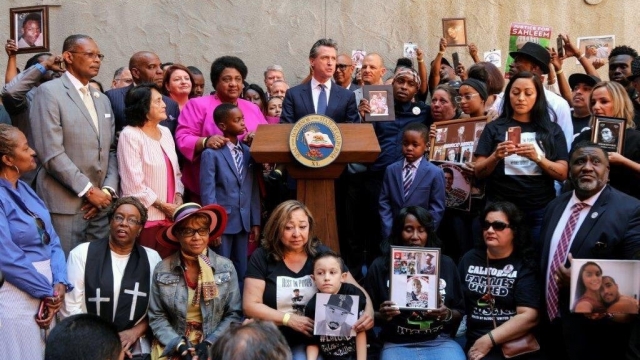 That bill, SB230, would order the state's Commission on Peace Officer Standards and Training to develop new guidelines and courses on police use of force.

In a news release, the president of the California Association of Highway Patrolmen said the legislative package will give officers "the tools and training they have requested and deserve" and "serve as an example for other states to follow."

It would also mandate new training and guidelines regarding "vulnerable populations," including people with disabilities and mental illness.

According to a new national survey by the Treatment Advocacy Center, law enforcement officers spent 21% of their time responding to and transporting people with mental illness in 2017. The report says officers are "often on the front lines of psychiatric care." In most states, de-escalation training requirements are set by local agencies. But many conduct little to no de-escalation training at all, according to APM Reports' analysis from 2017.

Gov. Gavin Newsom signed AB392 on Monday. It directs police officers to "use deadly force only when necessary in defense of human life." It also says they should "use other available resources and techniques if reasonably safe and feasible" to de-escalate a confrontation before shooting. It's believed to be one of the strictest police deadly force measures in the country.The bill was first introduced last year, not long after police fatally shot 22-year-old Stephon Clark. Clark was unarmed when he was killed in his grandmother's backyard in Sacramento. The officers who shot him were not charged.

Law enforcement groups opposed that bill when it was first introduced but later voiced their support after lawmakers reworked it to address their concerns.