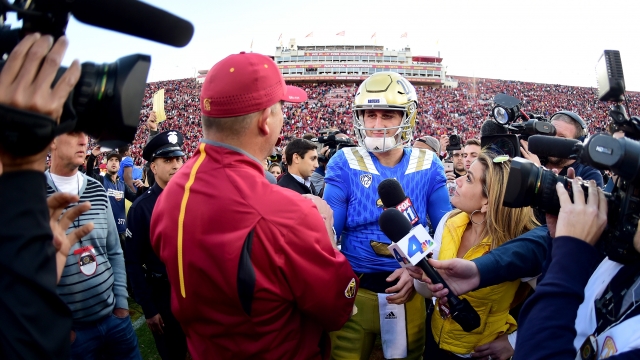 SMS
California Votes To Let College Athletes Turn Recognition Into Profit
By Peter Hecht
By Peter Hecht
September 11, 2019
State lawmakers in California approved legislation to allow college athletes to get paid for use of their name, image and likeness.
SHOW TRANSCRIPT

"What's at stake for a university if a player makes money off of their own likeness? The coaches are making millions coaching players whose families live below the poverty line."

Lebron James never suited up as a college athlete for his beloved Ohio State Buckeyes. Instead, he took his talents directly to the NBA, where he's made a fortune. But through his advocacy, including co-producing this documentary for HBO last year, James is seeking to change college sports so athletes can profit from their labors.

Now the California Legislature is on board. State Assembly members voted unanimously Monday in favor of a bill to allow college athletes in California to get paid for use of their name, image and likeness.

That has James celebrating on Twitter over legislation that may change college sports forever. Democratic presidential candidate Bernie Sanders chimed in, declaring that college athletes should be paid as workers, though the bill doesn't go that far.

But the Fair Pay to Play Act has the National Collegiate Athletic Association crying foul. Before the bill's passage, NCAA president Mark Emmert threatened to ban California schools from championship games for having an unfair advantage in recruiting, with athletes able to sell jerseys or cash in on marketing deals.

Larry Scott, commissioner of the Pac-12 Conference, which includes four California schools, said: "We're firmly against anything that would lead to a pay-for-play system."

And yet major college sports, led by men's football and basketball, earn riches off of athletes getting tuition, room and board. According to Forbes, the 25 most valuable football programs are worth $2.5 billion and clear an annual profit of $1.4 billion.

The football coach at Alabama, Nick Saban, earns more than $8 million in annual salary. The paycheck for Duke basketball coach Mike Krzyzewski is nearly $9 million. Some college basketball programs, suiting up amateur players, are more profitable than professional franchises in the NBA.

Ed O'Bannon led UCLA to a NCAA basketball championship in 1995, then was horrified years later to learn that a video game company was making huge profits from his likeness. O'Bannon and other former athletes sued, winning a federal appeals court ruling to seek compensation.

Chad Brown, a college football broadcaster who played at the University of Colorado and in the NFL, says the ultimate step for schools may be to directly compensate players for revenues they generate.

“Not to be compensated for what you bring to that school is unfair. It seems to now be at a point where that there is enough money coming in from television revenues and tournaments' revenue they can find a way to pay the players."