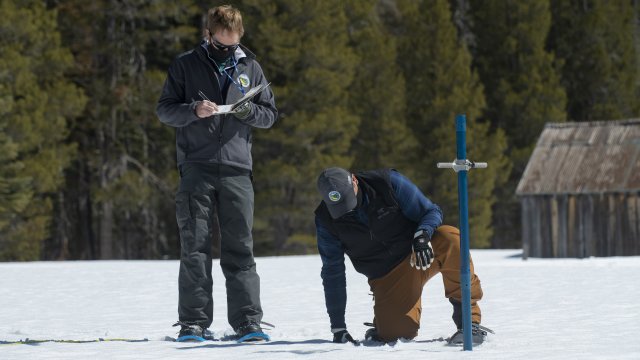 Another snowstorm blanketed northern California on Wednesday, with

Yet a new map, released Thursday by federal agencies, still shows most of California in either severe or extreme drought.

But it's a major improvement from over a week ago.

The snowpack was well above average in 2017, and now experts wonder if this winter could look the same.

It's only December, and even with snow this month at 158% of normal, the snowpack needs this winter to pack in more major storms.

"We really need the upcoming months to perform just as well as this one if we want this to help us pull out of the drought at all, so this is a really promising start," Andrew Schwartz, Station Manager of Central Sierra Snow Lab at University of California Berkeley, said. "We're at about 68% of what we would expect for an entire average winter. We need to only make up the other 32% before the rest of the snow can go towards drought relief and replenishing our water supply."

And it's in dire need of replenishing.

Due to annual runoff declining through the past decade, nearly all of the state's major reservoirs are well below their historic averages.

Things are so bad that earlier this month, state officials told water agencies to not expect any water from reservoirs heading into the new year. The governor warning, three weeks ago, the drought emergency and water conservation mandates will continue.

The hope is that massive snowstorms, however disruptive, will continue.

A study released in October found that the snowpack could largely disappear in 25 years if global warming continues unchecked. Previous studies have shown that increasing temperatures from human-caused climate change are shrinking snowpacks around the world and altering precipitation patterns.