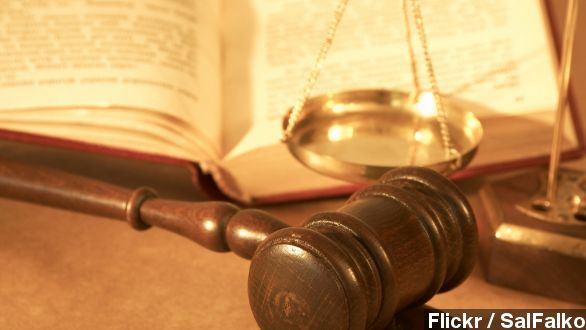 In a controversial move, a California judge ruled teacher tenures and other job protections unconstitutional for the golden state.

It argued teacher tenure laws and other protections hurt minorities and low-income students who get stuck with bad teachers that are nearly impossible to get rid of. (Via KNBC)

The judge wrote in his decision the evidence "shocks the conscience" and "there is also no dispute that there are a significant number of grossly ineffective teachers currently active in California classrooms." (Via San Jose Mercury News)

The judge went on to cite the historic ruling Brown vs. Board of Education, saying all students have a fundamental right to a quality education. (Via PBS)

While those nine students celebrated what might eventually become a landmark victory, the ruling was obviously frowned upon by area teachers and administrators.

"Seniority protects investment. It protects the district's investment in training teachers. ... And, what this is is a bait and switch. It's an attack on teachers." (Via KCAL)

But U.S. Education Secretary Arne Duncan doesn't share that sentiment and feels the decision will help build dialogue around a system that's in need of a fix. (Via Flickr / Center for American Progress)

"The students who brought this lawsuit are, unfortunately, just nine out of millions of young people in America who are disadvantaged by laws, practices and systems that fail to identify and support our best teachers and match them with our neediest students." (Via CNN)

The judge also issued a stay on the ruling, as the California Teachers Association said it plans to appeal the decision.