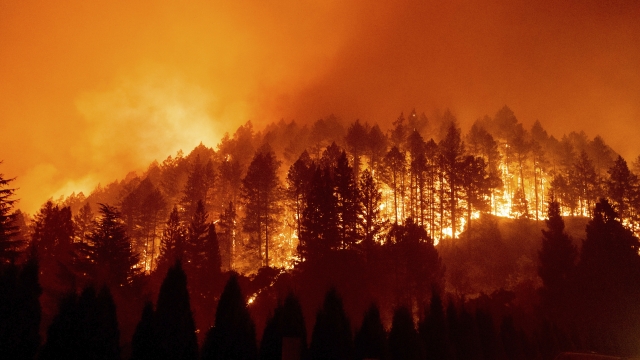 Utility companies have preemptively shut off power to more than 50,000 customers amid the heatwave.

Lauren Magarino: "Experts warn that more wildfires could spark in California as temperatures are forecast to reach the triple-digits in parts of the state today. Newsy's Katherine Beak has been keeping an eye on this for us. Katherine -- what is the National Weather Service saying about red flag warnings it's issued over this heat wave?"

Katherine Biek: "Well, these warnings are in effect in both northern and southern California through parts of today, Lauren. And the National Weather Service says these extremely high temperatures, combined with dry, gusty winds and low humidity, will result in critical fire conditions. And that means not only will more wildfires likely get started -- which we have seen already happened in Southern California over the last two days -- but they're also probably going to spread relatively quickly. And that's because winds are expected to reach between 45 to 55 MPH, depending on where they're blowing over the state. To try to cut down on that fire risk, utility companies have already preemptively shut off the power to more than 50,000 customers, while others have been told to conserve electricity. But Pacific Gas and Electric Co., which is the state's largest utility provider, has already said its customers who were affected should see their lights turned back on by late today, and meteorologists are expecting temperatures to decrease in most areas tomorrow, Lauren."

Magarino: "Okay, that's good that it's not gonna be too long before we see those temperatures drop down. The Trump administration rejected California's request for help to clean up the damage caused by six recent wildfires. Why?"

Biek: "California's Office of Emergency Services is the one that announced the federal government had rejected the state's request for help, and it couldn't provide any reason why specifically. President Trump has previously threatened to withhold financial assistance from the state, saying it hasn't done enough to cut down on its fire risk. Now Gov. Gavin Newsom requested the administration issue what's called a major presidential disaster declaration back in late September. And that type of declaration allows the state and federal government to share the costs for damage, clean-up and rebuilding following an emergency situation. In his request, Newsom cited fires like the Creek Fire, which is one of the largest wildfires in state history, as well as the El Dorado Fire, which was started by an explosion at a gender reveal party. In total, Newsom estimated $346 million in federal assistance was needed by the state. I should note, though, that the Trump administration has been providing assistance throughout this fire season to California. So this rejection is just the administration's answer to one specific request from the state. On Wednesday, the president increased the federal funds made available for fires started by lightning back in August, and he said the federal government was now going to cover the total cost of debris removal from those fires, Lauren."