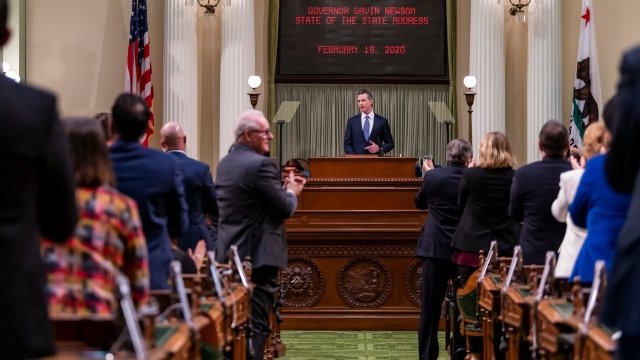 SMS
California Gov. Gavin Newsom Announces Plan To Fight Homelessness
By LeeAnne Lowry
By LeeAnne Lowry
February 20, 2020
Many suspect the progressive plan could mean a tax hike, but it's unclear where funding for the initiative will come from.
SHOW TRANSCRIPT

Newsom said in his State of the State address on Wednesday, "Let’s call it what it is, a disgrace, that the richest state in the richest nation — succeeding across so many sectors — is falling so far behind to properly house, heal, and humanely treat so many of its own people."

His plan is to turn over almost 300 state-owned properties to local governments to develop into homeless shelters. He also wants to allow the government to step in sooner to become legal guardians for homeless people with mental illnesses. That would give the state the ability to remove someone from the streets and force them into medical care.

California has the most homeless people of any state in the nation. There were an estimated 151,000 Californians without a home on any given day last year — a 16% jump from the year before.

Newsom signaled that the state is looking for a way to bring in "ongoing revenue" to fight homelessness. While many suspect the plan could mean a tax hike, it's still unclear where the funding will come from.