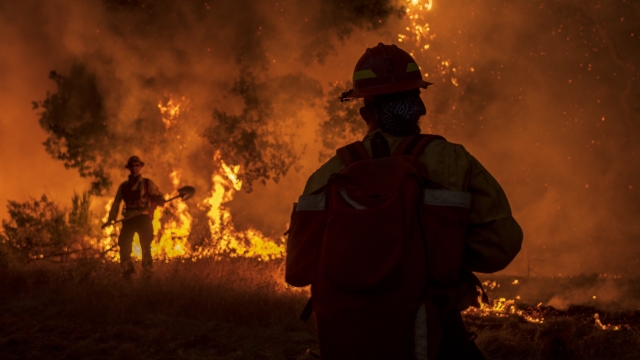 SMS
California Gov. Declares State Of Emergency Over Fires Amid Heat Wave
By Katherine Biek
By Katherine Biek
August 19, 2020
The declaration will free up resources for crews to fight dozens of fires currently burning across California.
SHOW TRANSCRIPT

California Gov. Gavin Newsom declared a state of emergency Tuesday as crews in the state continue to battle multiple wildfires amid a heat wave.

The declaration will free up resources for dozens of fires currently burning across California. The largest is actually a series of 20 separate lightning-caused fires grouped together into what's being called the SCU Lightning Complex fire group. Collectively, those fires have scorched at least 35,000 acres across five different counties. As of Tuesday night, firefighters only have the flames 4% contained.

In a statement, Newsom said, "California and its federal and local partners are working in lockstep to meet the challenge and remain vigilant in the face of continued dangerous weather conditions."

Newsom's announcement comes amid a record-breaking heat wave that's put serious strain on the state's power grid. As a result, residents experienced rolling black-outs for the first time in 19 years over the weekend.

According to meteorologists, nearly 42 million people in California will be under a heat warning this week.