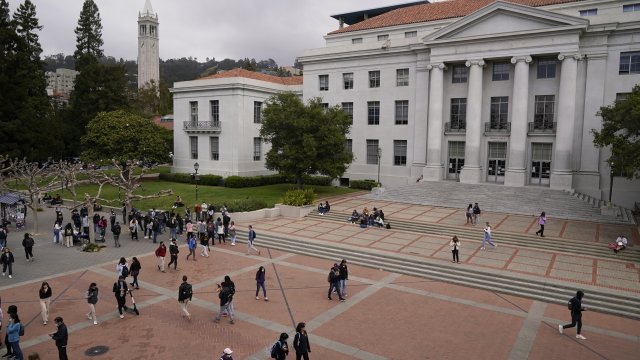 SMS
California Expanding Efforts To Make College Affordable
By James Packard
By James Packard
April 29, 2022
The Golden State is dramatically expanding its student aid efforts in what could become a model for other states.

As graduating high school seniors approach a college decision deadline this weekend, many are grappling with the cost of attending their dream schools.

"You have students who have to commute very long distances in order to attend classes or end up actually being homeless," said UC Berkeley Housing Policy Researcher David Garcia.

Now, the nation's most populous state is dramatically expanding its efforts to make a four-year degree more affordable.

California – already home to the nation's most robust student aid programs — is expanding eligibility for students in households making less than $200,000 a year.

"When you look at the average time it takes to pay off a debt, Black people end up paying much longer and they have higher loans of debt over time," said Piet Van Lier with Policy Matters Ohio.

And, for the first time, the state will consider grants to those students based on the total cost of college, including books, housing and transportation — not just tuition — as students at some of the most expensive schools struggle to find even the basics.

"I feel like most students go into this process blind and not knowing how bad and how difficult it is to find a roof over your head in Berkeley," UC Berkeley freshman Sanaa Sodhi said.

Resting on a promise from a then-candidate Joe Biden – to cancel $10,000 of student debt for all borrowers.

'I am not considering $50,000 debt reduction, but I'm in the process of taking a hard look at whether or not there are gonna there will be additional debt forgiveness," President Joe Biden said.

"This would make inflation worse this would add to the deficit this would continue to an emergency measure that no longer makes sense and this would be a give away disproportionately going to doctors, lawyers and other wealthy individuals with advanced degrees," said Marc Goldwein, with the Committee for a Responsible Federal Budget.

The administration already extended a pause on student loan repayments to August.

"If you can push it back two years why can't you just cancel it outright? And the benefits would be manifold," said Rachel Collyer, with the Ohio Student Association.

Now, the president is promising a more concrete plan in the next couple weeks.

While feathers ruffle among those who want real solutions.

"In my opinion it's a way for Biden to kick the can down the road another six months. It's more of a band-aid. It doesn't really solve the issue," Financial Adviser Tammy Trenta Knowlton said.