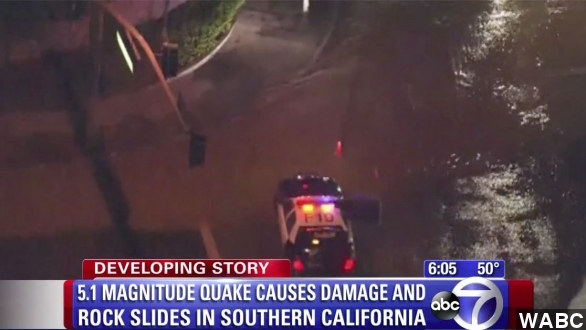 For the second time in ten days an earthquake hit California late Friday. This time — a magnitude-5.1 quake shook homes in La Habra, a suburb of Los Angeles, and was quickly followed by three smaller quakes.

"It was felt about 100 miles north and south of the epicenter. It caused damage, including a water main break that left streets flooded." (Via WABC)

According to USA Today, almost 2,000 homes reported power outages and the quake triggered a rock slide that flipped a car, causing the the driver and passengers minor injuries.

And the Orange County Register says about 50 people will be displaced due to housing damage, although no injuries were reported.

A seismologist told KNBC this earthquake was estimated to be about 10 times larger than the magnitude-4.4 quake that hit March 17. No major damages or injuries were reported from that earthquake.

While scientists have not yet been able to assign this newest earthquake to a particular fault line, many are worried it's related to the Puente Hills thrust fault.

That fault line caused the deadly Whittier Narrows earthquake in 1987, which killed eight people, injured hundreds more and racked up more than $358 million in property damages in east Los Angeles. (Via USGS)

The Los Angeles Times reports the Puente Hills thrust fault, which stretches roughly 15 miles between San Gabriel Valley and Los Angeles, has the capability of producing a magnitude-7.5 earthquake.

A seismologist told the LA Times the most recent quake comes with a 5 percent chance an even larger earthquake could hit sometimes in the next few days.