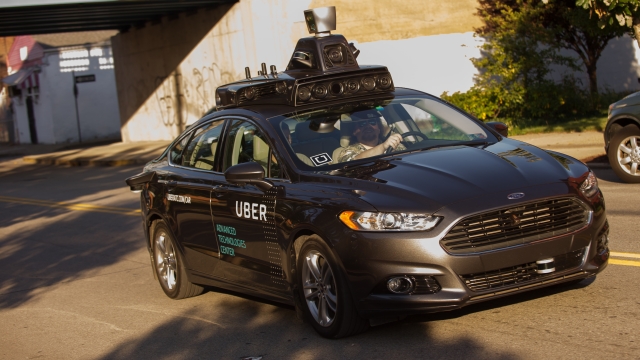 SMS
The California DMV Is Pumping The Brakes On Uber's Self-Driving Cars
By Briana Koeneman
By Briana Koeneman
December 15, 2016
The DMV says Uber needs a testing permit to operate its self-driving cars on public roads. But Uber says it doesn't need one.
SHOW TRANSCRIPT

It didn't take long for someone to pump the brakes on Uber's new self-driving cars in San Francisco.

The ride-hailing company unleashed its small fleet of autonomous Volvos in the city on Wednesday. And just hours later, the California Department of Motor Vehicles ordered the company to "cease the operations" of the vehicles until it receives the proper testing permit. If Uber refuses, the DMV says it will take legal action.

SEE MORE: Uber Updated Its Terms To Ban Flirting Between Drivers And Passengers

The California DMV has a process for vetting companies hoping to test autonomous driving technology on the state's roads. If a company meets the proper standards, it will get a testing permit.

There are currently 20 companies that hold that permit. Uber isn't on that list, and the DMV says it should be in order to operate self-driving cars on public roads.

But Uber says it doesn't need that permit. Here's why.

Uber claims its cars are still primarily controlled by humans — there is a driver inside each vehicle with his or her hands on the wheel, ready to take control just in case.

Uber launched its self-driving program in Pittsburgh earlier this year. The company says it's not planning to operate any differently than it does there.