California County May Revise Its Sanctuary Policy After Woman's Death 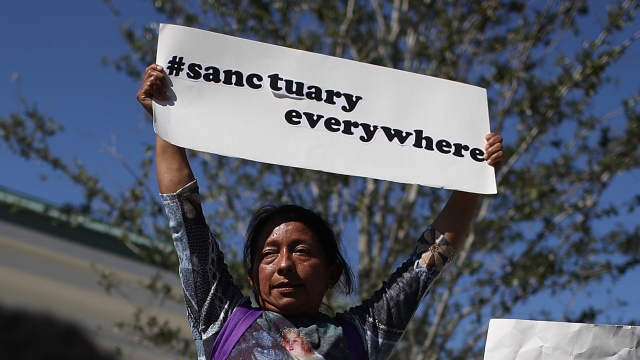 The slaying of a San Jose woman, allegedly by an undocumented immigrant with prior arrests, has sparked a heated debate in Santa Clara County.

"I find it very upsetting that anti-immigrant forces are trying to capitalize on this tragedy to roll back these sanctuary policies."

The recent slaying of a San Jose woman, allegedly by an undocumented immigrant with prior convictions, has sparked a heated debate about the pros and cons of sanctuary policies in the Silicon Valley.

"Please change this policy. Make sure that violent felons who are here illegally are deported and not released on the streets."

"Our county should keep this policy in order to avoid increasing an atmosphere of mistrust and fear among our immigrant brothers and sisters."

At the center of it all is this conundrum that applies to sanctuary cities nationwide: How far should local politicians go in avoiding cooperation with ICE — and at what cost?

"What we're asking is simply for the county jail to pick up the phone and call the federal authorities when a violent criminal is about to be released in the community."

"It's really a critical question for us to distinguish the very small number of people who are violent criminals, and the 99-plus percent of immigrants who come to our community and to our country to build their lives, their families, and work hard and do everything they can to be part of America."

Arevalo-Carranza was convicted of multiple crimes in recent years and served time in different local jails. However, he was never transferred to ICE, despite the agency's multiple detainer requests.

"A lot of forces both on the law enforcement end and on the political end, are making an issue of that, on the premise that he could have been sent out of the country prior to his contact with Miss Larson."

California's own sanctuary law prohibits local law enforcement from complying with ICE detainers — that's when ICE asks a local jail to hold an undocumented inmate for an additional 48 hours to facilitate a custody transfer. Local police are allowed to communicate with ICE about some inmates, like Arevalo-Carranza, who have been convicted of crimes in the past. However, Santa Clara County's non-cooperation policy is stricter than the state standard.

"The argument for advocates of the Santa Clara County sanctuary policy is that 'we need to bring better than state law.' And this homicide shouldn't bring the county back down to a lower standard that the state endorses."

In a long and heated meeting in early April, the Santa Clara County Board of Supervisors approved proposals to explore ways to change the current sanctuary policy, which Supervisor Dave Cortese calls "too ambiguous."

"What the language has always said is that county officials, when faced with a significant law enforcement concern, can communicate with ICE. It doesn't specify when, what would trigger that."

California's sanctuary law allows localities to notify ICE when someone in jail has been convicted of any of roughly 800 offenses. But Supervisor Cortese says using such a list — even a narrower one — could have serious civil rights ramifications.

"Is there some way to do notifications of serious and violent felons without essentially violating people's civil rights, and essentially forcing ourselves to inquire of the 360,000 non-citizens who live and work here in our county every day, as they happen to get stopped for a misdemeanor or felony or whatever is on this list? Are we really going to take that rap sheet and start asking people for citizenship documentation? I mean, it's almost scary to think that you'd have government officials in this country randomly making decisions, you know, about who might be an ICE suspect and who might not. How do you determine that by language?"

"Even the suggestion that we are going to start looking at potential changes to the policy really sparks fear in a very vulnerable community."

Supervisor Susan Ellenberg was the only board member to vote against the proposals. She argues that counties with robust sanctuary policies, like Santa Clara, tend to be safer as a result — and that idea falls in line with recent research from the left-leaning Center for American Progress. Ellenberg also says policymakers should look at factors besides Arevalo-Carranza's immigration status.

"I think our biggest issues are not around people's immigration status, but mental health status, level of addiction, tendency to recidivate their violent activity … Who are we arresting, booking? What is the process for releasing somebody pre-trial? What is their risk to the community? And that's where I want to reassure community members that we can keep them safer by more effectively addressing those very real issues."

The proposals approved by the county board ask law enforcement leaders to report back in 60 days with options on how to best implement a possible policy shift.

"This is a pivot point for the county as far as how it deals with crime, the intersection of crime and immigration policy, because ultimately, that's what we're talking about here. And I think everyone understands that, whatever happens on this issue is going to, you know, be a compass for where the county where this local community is going to go moving forward."