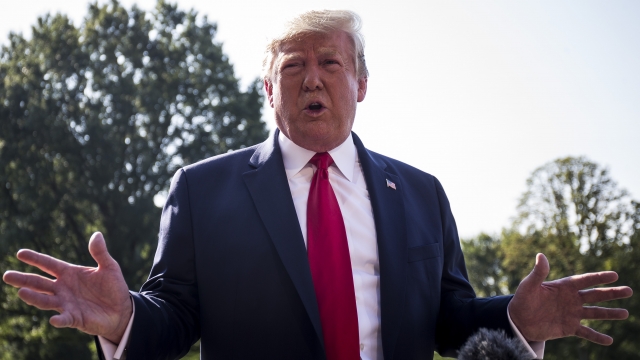 SMS
California Counties Sue Over Trump's 'Public Charge' Rule
By Katherine Biek
By Katherine Biek
August 14, 2019
Under the rule, a person could be denied a green card or visa if they use benefits like food stamps or public housing for a certain length of time.
SHOW TRANSCRIPT

Two California counties are suing the Trump administration over its new rule that would make it easier for the government to deny immigrants entry into the U.S. if they're deemed "likely" to use a wide range of public benefits.

The rule would expand the definition of a "public charge," or a person who relies on government aid, such as cash assistance, food stamps, public housing or most forms of Medicaid. Under the rule, a person could be denied a green card or visa if they use one or more designated public benefits for more than 12 months in any three-year period.

The government currently operates under guidance issued during the Clinton administration, which says officials can only consider cash benefits when deciding if an immigrant is a "public charge." This new rule will expand the type of benefits that can be considered.

In their lawsuit, the counties of San Francisco and Santa Clara argue the rule will result in immigrants not enrolling in benefits they're eligible for. The counties say lower enrollment will have a broad impact on public health and their economies.

They also argue the rule conflicts with "the broader congressional framework of U.S. immigration law," making it unlawful.

Ken Cuccinelli, the acting director of U.S. Citizenship and Immigration Services, responded to the lawsuit Tuesday while on CNN.

"I can't say it's terribly surprising. This is a thousand page rule. I'd be willing to bet -- and I'm not a betting man -- that they haven't read it front to back, and while not everybody has to read it, if you're going to file a lawsuit you need to know what you're filing a lawsuit on. This rule is well within the boundaries of the law," Cuccinelli said.

The Trump administration first proposed the rule back in September. It's since made some changes to the final regulation, such as making exemptions for children and pregnant women enrolled in Medicaid.

The rule also won't apply to refugees or asylum seekers. It's scheduled to go into effect in October.