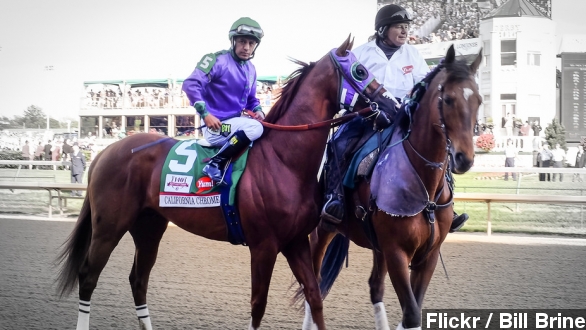 ​It looks like we'll have to wait at least another year for a Triple Crown winner as Tonalist stole the shine from California Chrome, and all other Thoroughbred horses, Saturday to win at Belmont Stakes.

California Chrome and jockey Victor Espinoza went in with ⅘ odds and, according to some reports, Chrome was in good spirits the morning of the race. But that wasn't enough to come out with the win. (Via Flickr / Michael Candelori, Bill Brine)

The New York Times explains Chrome "got a good start, and ran on the rail in striking distance for most of the race. He swung four wide turning for home, but came up empty in the stretch."

The frustration of coming so close and falling short sent Chrome's usually-affable co-owner Steve Coburn into a vicious rant on live television. Coburn said it wasn't fair that some horses didn't run at the Derby and Preakness but participated at Belmont.

"You know what? If you’ve got a horse, run him in all three. … This is the coward's way out." (Via NBC Sports)

Although Chrome won the first two legs of the Triple Crown, USA Today explains why Belmont Stakes is considered tougher than the rest.

"There's a reason why it's been 36 years. One of the reasons is that it's a mile and a half, the longest of the three races. … There are 11 horses and eight of them are fresher than California Chrome."

Part of Chrome's popularity had to do with his backstory. It was, by most account, a movie-ready story which included Chrome's owners, trainer and jockey. (Via The New York Racing Association, Inc.)

"Steve Coburn and Perry Martin bought an average filly for just $8,000 … That filly gave birth to California Chrome." (Via ABC)

Then there's Victor Espinoza, who reportedly grew up fearing horses. Espinoza's loss Saturday was his second time falling short of the Triple Crown — the first was with War Emblem in 2002. (Via CNN)

Tonalist, jockey Joel Rosario and the rest of Tonalist's team will take home approximately $800,000 for the win.