California Beachfront Taken From 1920s Black Couple Given To Heirs 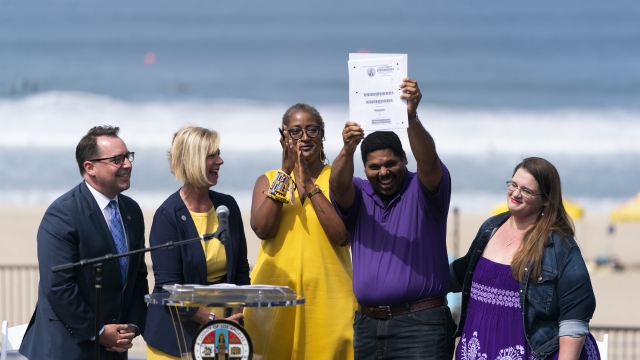 SMS
California Beachfront Taken From 1920s Black Couple Given To Heirs
By James Packard
By James Packard
July 22, 2022
Los Angeles County took land from Charles and Willa Bruce in the 1920s under eminent domain. It has finally been returned to their family.

This week, a first-of-its kind land reparation is happening in southern California.

A Black family robbed of their money-making land in the 1920s now stands to make millions off the land they should have owned all along.

"Today we are celebrating the final step in the return of Bruce's Beach to the legal heirs of two visionary entrepreneurs," Los Angeles County Supervisor Holly Mitchell said.

Charles and Willa Bruce bought the beachfront plot in Los Angeles' Manhattan Beach in the early 1900s for a little over $1,200. They turned it into a little paradise — a bath house, a dance hall, a cafe — as the first west coast resort for Black people.

It was a new target for the KKK in the 1920s, when Manhattan Beach took the land from the couple under eminent domain — ostensibly to build a park.

But they didn't do that.

Now, Charles and Willa Bruce's great and great-great-grandsons – blocked from the wealth that should have been theirs — own a plot estimated to be worth tens of millions.

"It's almost like being transported to the other side of the known universe," Anthony Bruce, great-great-grandson of Charles and Willa Bruce, said. "It's like going from [being] a middle-class American to, you know, a wealthy class American."

The family is now leasing the land to the county that owned it for the last 20-plus years for $400,000 a year. The county has the option to buy it from them for some $20 million.

"This is one win, but we deserve more wins," Kavon Ward, organizer of Justice for Bruce's Beach, said. "And I'm going to help all the Black families that I can try to reclaim the land that was stolen from them."

It's the beginning of a new chapter in the country’s racist history, returning wealth to families robbed of it.