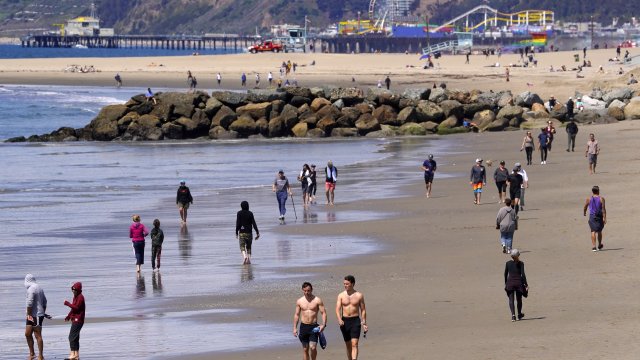 Beaches across California are closing after a shelter-in-place order was widely ignored over the weekend.

"Those young people that are still out there on the beaches thinking this is a party, time to grow up. Time to wake up. Time to recognize it's not just about the old folks. It's about your impact on their lives. Don't be selfish."

But photos from Venice Beach in Los Angeles on Saturday showed many residents doing the opposite. And photos showed residents in San Francisco crowding Baker Beach on Sunday.

Los Angeles Mayor Eric Garcetti said in a statement on Twitter, "This weekend we saw too many people packing beaches, trails and parks. So we are closing sports and recreation at @LACityParks and closing parking at city beaches. That doesn’t mean gather elsewhere. This is serious. Stay home and save lives."

The mayor of Long Beach similarly closed parks and playgrounds. Meanwhile, Florida is beginning to issue similar closures. Boca Raton, Florida closed off its boat ramp and sent out a warning that now is not the time for parties on the waterfront, telling residents to do their part to stop the spread of the virus. Miami-Dade County's mayor also closed boat ramps and marinas to reduce social gatherings.