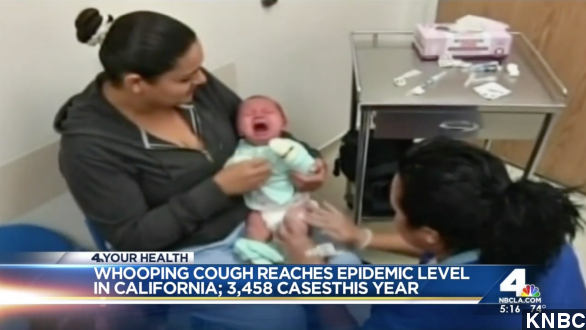 SMS
Calif. Health Officials Declare Whooping Cough Epidemic
By Collin Ruane
By Collin Ruane
June 15, 2014
The number of whooping cough cases in Sacramento County jumped from 74 in all of 2013. There are already 177 reported cases in 2014.
SHOW TRANSCRIPT

Health officials in California have declared whooping cough an epidemic as cases skyrocket across the state.

KOVR reports the number of whooping cough cases statewide is already higher this year than it was in all of 2013. In Sacramento County for example, there were 74 cases last year. So far this year, 177 cases have already been reported.

According to CNN, health officials in California have seen 800 cases of the highly contagious whooping cough in just the past two weeks. According to the CDC, one person can spread the illness to up to 15 others.

Officials say the best way to prevent yourself from getting the disease is by getting vaccinated. (Via NBC)

NPR reports California's 2010 whooping cough epidemic was the worst in more than 60 years. More than 9,000 people contracted the disease and 10 infants died. Health officials say part of it had to do with some parents refusing to get their kids vaccinated.

Infants and young children are typically the hardest hit during whooping cough outbreaks. Acccording to KNBC, a 2-month-old in California has died from this year's outbreak.

Nationally, the CDC says cases are up 24 percent from January to April of this year compared to the same time last year.