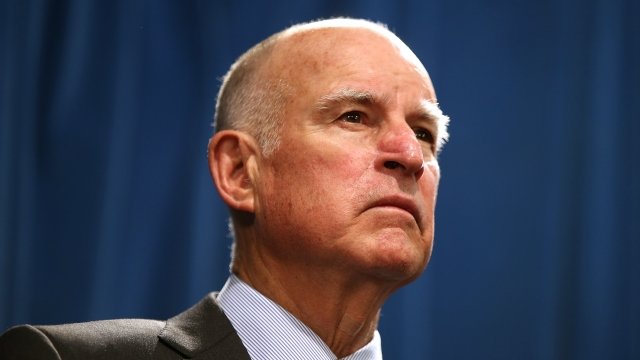 SMS
California Gov. Jerry Brown Vetoes Bill Targeting Trump's Tax Returns
By Jake Jones
By Jake Jones
October 16, 2017
More than 20 states have advanced bills similar to the one Brown vetoed, but none of those bills have become law.
SHOW TRANSCRIPT

The latest effort to compel presidential candidates to release their tax returns has failed.

California Gov. Jerry Brown vetoed his state legislature's bill that would require a presidential candidate to share their last five tax returns in order to appear on the primary ballot.

California was one of more than 20 states that advanced bills similar to the one Brown vetoed. So far, none of those bills has become law.

A bill in New Jersey did come close to fruition: The state's legislature passed a bill that would've forced presidential candidates to reveal their tax returns. But Gov. Chris Christie, a staunch supporter of President Donald Trump, vetoed the bill, calling it a "transparent political stunt."

In his veto statement, Brown said he recognized the "attractiveness" and "even the merits" of such a bill. He also acknowledged the bill was in direct response to Donald Trump's refusal to release his own tax returns during the 2016 presidential race.

But Brown questioned the constitutionality of a law requiring a person to reveal their tax returns, which he pointed out are confidential by law. He also raised the question of setting up a "slippery slope."

He wrote: "Today we require tax returns, but what would be next? Five years of health records? A certified birth certificate? High school report cards? And will these requirements vary depending on which political party is in power?"

But not everyone shares his concerns.

One Hawaii state representative told Politico that, with more than three years before the next presidential election, no one was in a rush to pass a bill of this kind. And a Massachusetts state senator said that even though Brown doesn't think the bill is constitutional, the courts might see it differently.