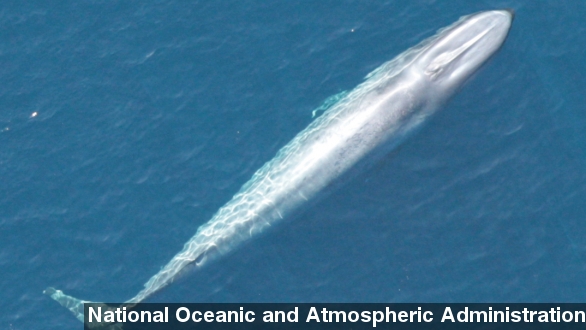 By Adam Falk
September 5, 2014
Previously threatened by whaling, California blue whales are now back to near-historic levels, according to a new study.
SHOW TRANSCRIPT

They're being called a "conservation success story." California blue whales are back to near historic numbers, according to new research by the University of Washington.

The study found there are now about 2,200 California blue whales. That number might not sound large, but researchers say that's 97 percent of the animal's historic population. (Video via NBC)

Of course, in order to figure out just how impressive the whales' recovery has been, researchers had to find out exactly how many were lost.

Between 1905 and 1971, an estimated 3,400 California blue whales were killed due to whale hunting. The practice was banned in 1966, but Russian fleets reportedly continued hunting the whales illegally.

The BBC reports: "Most of the data on the catches was kept secret under the Soviet regime. Scientists have only recently been able to get access to this information in the archives."

But since 1971, the nearly 200-ton creatures have been making a comeback.

It's an impressive feat, considering what happened to other blue whale populations. Discovery writes, "This is the only population of blue whales in the world known to have recovered from whaling."

But why? Hint: It's not the California sunshine. The study's lead author says, "The recovery of California blue whales from whaling demonstrates the ability of blue whale populations to rebuild under careful management and conservation measures."

However, there are still some concerns over ship-whale collisions off the California coast. Reports indicate about 11 blue whales are struck per year.

Researchers say those collisions are not expected to significantly impact whale populations right now. But it's a bad habit that could get worse in the long term.

New findings say the number of ships could increase by as much as 11-fold. If that happens, the study's authors say there's a 50 percent chance the whale population could decrease significantly.

For its part, California launched a program last month that will give shippers money for slowing down when traveling through the Santa Barbara Channel, a popular feeding spot for the blue whales.

The Los Angeles Times reports, "Lower speeds are expected to reduce the risk of ship strikes that are fatal to whales and could give the giant marine mammals more time to swim away from approaching ships."

This video includes images from the National Oceanic and Atmospheric Administration, Mike Baird / CC BY 2.0 and Ronald Woan / CC BY NC 2.0.