Calif. Begins High-Speed Rail Project, But Can It Finish? 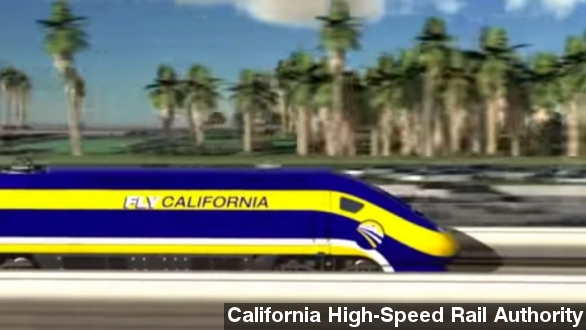 After a lengthy delay, the first high-speed rail service in the country to begin construction finally kicked off Tuesday in Fresno, California.

The California High-Speed Rail Authority says the new bullet train will initially carry travelers from Los Angeles to San Francisco in less than three hours at speeds of 200 mph. Sacramento and San Diego are expected to join in later on.

"Everything big runs into opposition."

California Gov. Jerry Brown and other proponents say the system aligns with the state's energy efficiency goals and will stimulate the economy with thousands of new jobs. (Video via KTTV)

But opponents argue it could pose a threat to the environment as well when it travels through more rural areas.

"What high-speed rail needs to figure out is how to enter densely populated areas and how to traverse environmentally sensitive areas," said S.A.F.E. Coalition President Dave Depinto.

Other critics say the project is too costly and will ultimately burden taxpayers.

The massive $68-billion project has been delayed for two years, and critics say that could be its downfall.

The Los Angeles Times says the project still faces financial and legislative obstacles, and, because it's gotten such a late start, construction will have to speed up to meet federal funding requirements.

Congressman Kevin McCarthy told The Times, "Now it is less likely they are going to get federal money. They haven't solved their problems yet. Their business plan doesn't show it is viable. It could become like the skeleton of an unfinished building and they will have to stop."

The first 520-mile portion of the high-speed rail service connecting downtown L.A. to downtown San Francisco is expected to be completed by 2029.